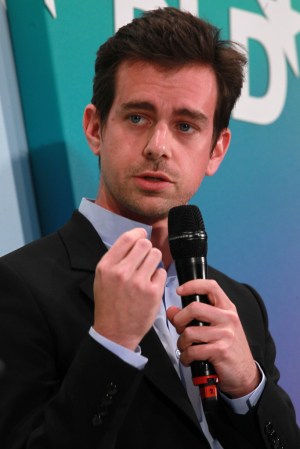 Twitter’s Promoted Products — including Promoted Tweets, Accounts and Trends — are seeing 3 to 5 percent engagement, Dorsey said. “Advertisers are coming back … [the market] is proving that this is something people want to see more of.”

The company’s Promoted Products offer advertisers a way to purchase their to the top of search results and, more recently, to buy their way inside the Twitter streams of members who may or may not be following them. The company’s fledgling advertising suite of products has been moderately successful from a purely financial perspective — the company was projected to earn $140 million in revenue for 2011.

During the DLD interview, journalists Holger Schmidt and David Kirkpatrick also peppered the Twitter founder and Square CEO about the information network’s place in the social ecosystem. Schmidt asked about Twitter’s place in relation to Google and Facebook, and Kirkpatrick queried the even-keeled entrepreneur as to whether Google+ constituted a threat to Twitter.

Twitter, said Dorsey, is distinct because it hosts a public conversation in a public medium. Its future is not threatened by the existence of Google’s social network, he added. Dorsey also spelled out that Twitter’s primary objective is to become something so simple that the whole world can use it to consume information and find breaking news. Consumption and news discovery, not the act of tweeting, he said, is becoming an increasingly popular way for people, especially non-Twitter members, to discover information.

Dorsey avoided saying anything inflammatory about Twitter’s social competitors, opting instead to focus on the company’s strengths as a service. Dorsey was, however, vocal about Twitter’s business model and its continued role as a medium for information exchange. When asked about whether Twitter is contributing to a new age of democracy (in light of recent developments around SOPA), Dorsey said that free access to information helps the world and humanizes mass events.