Online payments firm Jambool said today it is bringing its in-game payments system to games based on Adobe Flash. That means it will be easier to monetize thousands of Flash games built by indie developers for casual gamers on the web.

San Francisco-based Jambool makes Social Gold, a virtual currency and payments platform. Social Gold has taken off on Facebook, where players use it to pay for virtual goods in a wide variety of social games. With Social Gold for Flash, players can pay for items or game expansions without 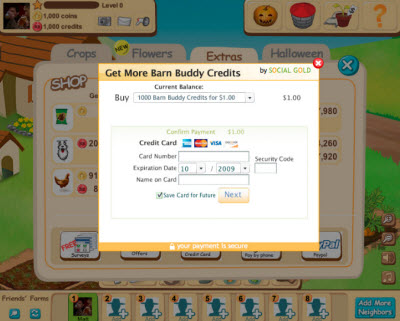 exiting a game. That’s important because players often abandon a transaction if they have to exit a game to make a payment. With Social Gold for Flash, the payment system can be more frictionless and Flash developers can move from being hobbyists to setting up real businesses.

RealGames is using Social Gold for Flash inside its recently launched Uno game, while TheBroth used it within its Barn Buddy game (pictured). That game has seven million monthly active users.

Jambool was founded in 2006 and has 15 employees. Its rivals include PlaySpan and Live Gamer. Jambool has raised $6 million in two rounds to date from Madrona and Bay Partners. Social Gold launched in 2008 and is now used in hundreds of social apps and games.