With the third major update of its Up health band, Jawbone is finally adding a long-awaited feature: wireless synchronization.

The company today announced its latest Up model, the Up24, which takes advantage of Bluetooth Smart’s low-energy capabilities to offer wireless syncing without a major battery hit. Up24 may look the same as Jawbone’s previous Up models (upon closer inspection, it’s a bit smoother to the touch), and it offers the same basic ability to track your steps and your sleep habits. But remarkably, it still offers the same 7 days of battery life.

Rather than just offer a wireless replacement for the Up’s traditional syncing method (which involved plugging the device into your phone’s headphone jack), Jawbone is also using the Up24’s constant connection to your phone to power new app notifications to keep you moving throughout the day.

After using Up24 for the past few days, I was surprised at how seamlessly it worked. I can glance at my daily step count in the Up app without waiting for a lengthy synchronization (it’s constantly updating your stats in the background), and I never had to re-synchronize the Up24 with my phone (unlike many other Bluetooth devices). Changing settings on the Up24 is also much simpler than past models, since you don’t have to jack in the health band for every minor tweak. (It’s especially useful for changing Up24’s smart sleep alarm on the fly.) 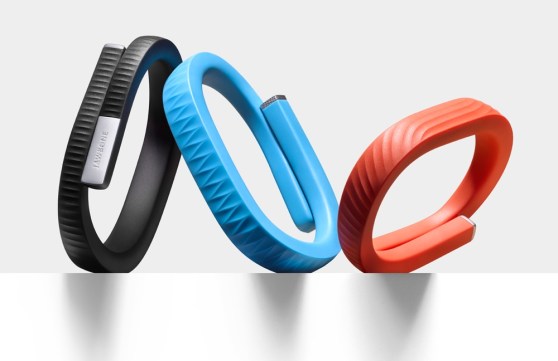 Above: Up24 (left and right) and Up (center) health bands

While I liked last year’s revamped Up model (which sported many internal tweaks to make it more durable than the first Up), manually synchronizing it always felt like a jarring experience. Previously, you had to take off the band, unplug its tiny end-cap, and stick it into your phone to synchronize the app. Now with Up24, Jawbone has finally delivered its first truly no-compromise health band.

Jawbone has also updated its Up iPhone app with a slew of new features, including new bite-sized goals dubbed “Today I Will” (they can help motivate you to sleep more, or walk more, if you’ve been lax at meeting your existing goals); new recognition for consistent streaks in meeting your goals and major milestones; and the ability to track your sleep habits even if you forgot to turn on Up’s sleep mode. All of the new app features that don’t rely on wireless syncing will also work on last year’s Up model.

Check back later for a full Up24 review.