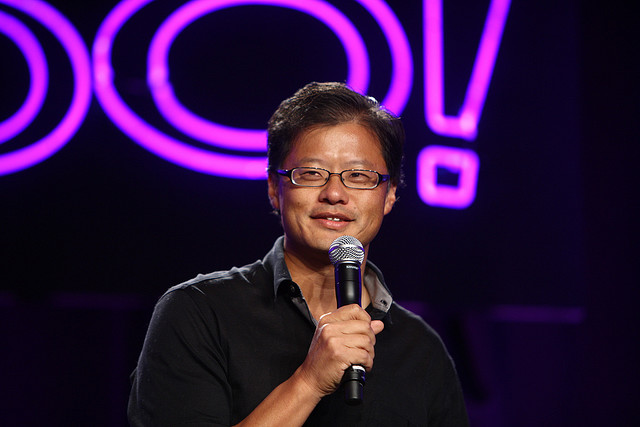 Yahoo co-founder and former CEO Jerry Yang has resigned from the Yahoo board of directors and all other positions, the company announced late today. Yang also resigned from the boards of Yahoo Japan and Alibaba Group.

In a letter to board chairman Roy Bostock, Yang wrote:

“My time at Yahoo, from its founding to the present, has encompassed some of the most exciting and rewarding experiences of my life. However, the time has come for me to pursue other interests outside of Yahoo! As I leave the company I co-founded nearly 17 years ago, I am enthusiastic about the appointment of Scott Thompson as Chief Executive Officer and his ability, along with the entire Yahoo! leadership team, to guide Yahoo! into an exciting and successful future.”

Yang co-founded Yahoo with David Filo in 1995 and has been on the board of directors since March 1995. He served as CEO from June 2007 to Jan. 2009 and has had a hand in the direction of the company since that time.

“Jerry Yang is a visionary and a pioneer, who has contributed enormously to Yahoo! during his many years of service,” said Roy Bostock, Chairman of the Yahoo! Board. “It has been a pleasure to work with Jerry. His unique strategic insights have been invaluable. He has always remained focused on the best interests of Yahoo!’s stakeholders, including shareholders, employees and more than 700 million users. And while I and the entire Board respect his decision, we will miss his remarkable perspective, vision and wise counsel. On behalf of the Board, we thank Jerry and wish him all the very best in his future endeavors.”

Yahoo has been in a volatile state since the firing of former CEO Carol Bartz. The company named former PayPal President Scott Thompson in early January to reign the company in and find ways to get it back on track.

One mid-October report suggested Yang was extremely unhappy with the state of the company and was interested in taking it private. If that story had any truth to it, Yang could have been forced out by the board. Without Yang’s seemingly steady hand, it’s hard to guess what will happen next with Yahoo. We wrote a list of 5 things Yahoo should do with Thompson now at the head, including improving its core e-mail offering and restoring Flickr to greatness.

And one report filed last week at All Things D suggests Yang may not be the only board member on the way out. The report said Bostock, Arthur Kern, Vyomesh Joshi, and Gary Wilson also could be ready to take off. With Yang gone, it’s certainly possible others could follow.

Do you think Yang was forced out? What will happen to Yahoo now?