Jobcase, a self-described open access platform for jobs seekers and employers, today announced that it has secured $100 million in a growth equity round led by Providence Strategic Growth (PSG), bringing the Boston startup’s total raised to $118.9 million, according to Crunchbase. The bulk of the fresh capital will be put toward product development (and potentially strategic acquisitions), according to CEO Fred Goff, specifically in the areas of machine learning and new integrations and APIs.

“We are thrilled to have PSG as a partner that understands people need not navigate the future of work alone,” he said. “At its core, Jobcase is a platform where people help people. Often, the future of work can be intimidating to individuals. [Jobcase members] stand stronger together.”

Jobcase — which Goff, who previously headed Percipio Capital Management, founded in 2015 — is chiefly targeted at the roughly 70 percent of U.S. adults without a four-year college degree, and has a business model akin to LinkedIn. Would-be employees have access to job postings and reviews, while businesses get a suite of recruiting tools. Jobcase levies fees for pages with information about job openings: $229 for one job, $249 per month for three, and $599 per month for ten.

Its bread and butter, though, is a community portal organized around groups — or Hubs, in Jobcase’s parlance. It’s where they can ask for tips on navigating the hiring process, Goff says, like how to follow up after a job interview and what to expect during screener interviews. Members can join company Hubs for Walmart, Lyft, Amazon, and hundreds of other employers, and within those Hubs publish posts, respond with comments to others’ contributions, and follow individual users. 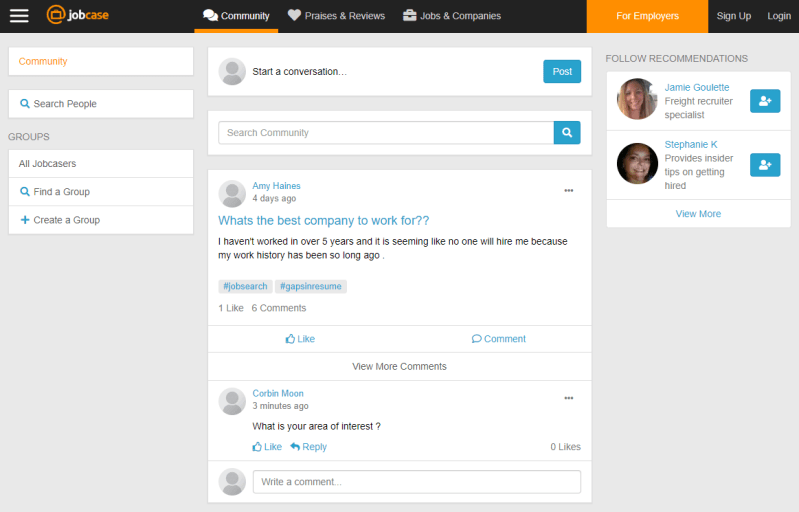 Like LinkedIn, Jobcase members can upload their work histories and endorse others with “praises,” which they carry with them role-to-role. And in the course of their job searches, they can view information from third-party services like Glassdoor, CareerBuilder, JobInsider, and Indeed.

Jobcase says that it has over 100 million registered members (up from 80 million in February) and that 25 million unique active users visit the site each month. Additionally, it says its technology powers over 100 geographically targeted job boards and career sites, many of which are owned by a Jobcase subsidiary.

In the coming months, Jobcase plans to roll out improved algorithms that surface more relevant content to users, along with tools that “increase [the] ease” of engaging with employment opportunities and connecting with others on the platform.

“We are proud to help expedite Jobcase’s mission to empower people in their pursuit of a happy and meaningful work-life,” said PSG CEO Mark Hastings in a statement. “Jobcase’s unique approach that prioritizes community has catapulted the company to its position as an industry leader. The company is well positioned to fulfill the pressing need for connection in this space both domestically and abroad.”

Jobcase currently employs a team of nearly 200 data analysts, scientists, and software engineers, some of whom hail from the Massachusetts Institute of Technology, Carnegie Mellon, and Princeton. Not coincidentally, it’s an affiliate of the MIT’s Computer Science and Artificial Intelligence Laboratory (CSAIL), and it partners with nonprofit and charitable organizations in underserved communities through its social responsibility program, Jobcase Cares.