Steve Jobs’ life will live large once more on the silver screen starting in theaters around the country on April 19. Judging by Apple’s stock market performance yesterday, the company he founded could use him back there too.

jOBS stars Ashton Kutcher as, of course, Steve Jobs, and Josh Gad as Steve Wozniak, telling “the story of Steve Jobs’ ascension from college dropout into one of the most revered creative entrepreneurs of the 20th century,” as the movies’ producers have framed it on IMDB. Matthew Modine has a small role as well, playing ill-fated Apple CEO John Scully.

The jOBS movie, following on the footsteps of The Social Network just two years ago, shows the increased importance technology and those who create it have in popular culture. No one made a movie about Bill Hewlett and Dave Packard in the ’80s or IBM founder Thomas Watson — who led IBM for a staggering 42 years — in the ’70s.

Of course, it helps that Steve Jobs was crazily charismatic. Even though Bill Gates is one of the richest people in the world, and now one of the foremost philanthropists of all time, no one has ever produced a biopic of the Microsoft founder.

While most of us will have to wait almost three months to see the movie, the worldwide premiere is actually in just three days at the Sundance film festival in Park City, Utah. (If you’re attending and want to provide a review for VentureBeat, let me know.)

Meanwhile, the rest of us will just have to settle for a one-minute clip released to Entertainment Week this morning. 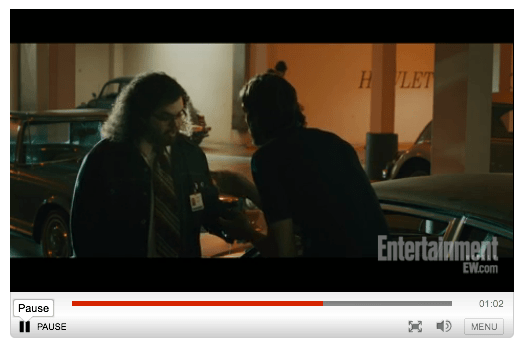 Above: Jobs and Wozniak arguing in an underground HP parking lot