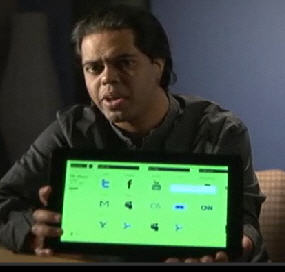 The runup to JooJoo’s launch in December got ugly. Arrington, who conceived the CrunchPad idea and brought Fusion Garage in to manufacture it, claimed that Fusion Garage CEO Chandrasekar “Chandra” Rathakrishnan had backstabbed him, cutting him out of his role as leader and arranging with investors for Fusion Garage to sell the tablet themselves.

On JooJoo’s launch day, ex-lawyer Arrington published the full text of a lawsuit he’d filed over the rift. Rathakrishnan, in return, did a video presentation a week later in which he called some of Arrington’s claims untrue. Fusion Garage has, not surprisingly, filed a motion to dismiss the whole thing.

I’m bored with the lawsuit. Here’s what I want to know: Is the JooJoo going to ship in the next 1-3 weeks as promised, or no? Fusion Garage started taking pre-orders at $499 in mid-December, and pledged to ship within 8-10 weeks.

And how does Fusion Garage view the iPad, the undeniable threat to JooJoo’s existence?

I got Chandra on the phone from Singapore on Sunday. Here’s an edit of our conversation. 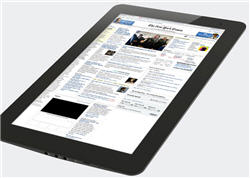 VentureBeat: When will the first JooJoos reach customers’ hands?

Chandrasekar Rathakrishnan: The JooJoos will be in consumer hands by the end of February. That’s within the 8 to 10 week window we promised.

VB: How many pre-orders do you have?

CR: I can’t give you the number. I can definitely say that our pre-orders have exceeded our expectations. Since the iPad’s launch, we have had an increase in inquiries.

VB: What can you tell me about your funding?

CR: We have $3 million that we have raised so far. We will be announcing a new round of funding shortly. More important, we have innovated a new business model by a relationship with an OEM that removes all of the high up-front costs of manufacturing for us. We are just waiting for the final approval for the announcement. But our OEM is a mobile phone maker in southeast Asia, and their market share here is right behind Nokia, double digits. They will eliminate all of our up-front manufacturing costs in return for a royalty on every JooJoo unit that is sold.

VB: What browser does it use?

CR: We use a WebKit-based browser, to which we’ve added our own branding. [WebKit is an open-source version of the same core software Apple uses for its Safari browsers on the Mac, iPhone and iPad.]

VB: Does it support Flash?

VB: What about wireless networking?

CR: The first units will be Wi-Fi only. We are not ruling out the possibility of 3G in the near future.

VB: Will there be JooJoo apps?

CR: No. Most of the apps in Apple’s store are a reflection of things that are already on the Internet. And now you have to build them twice — once for the iPhone, and once for the much larger, higher resolution iPad screen. Our app store will be the entire Internet, completely open and completely uncompromised.