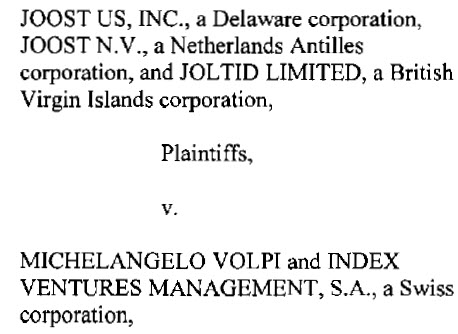 Online video player Joost and the founders of Skype have filed a lawsuit against Joost’s former chief executive and chairman, Mike Volpi, for alleged theft of company information that was used in the successful bid for Skype. It also named Volpi’s venture capital firm, Index Ventures, which he joined after leaving video-sharing firm Joost.

Joost was founded by Skype founders Janus Friis and Niklas Zennstrom. On Sept. 11, they announced that Volpi was stepping down as chairman of Joost and that the company was investigating his actions while chairman. Volpi had quit his job as chief executive of Joost in July to join Index Ventures, which was one of the companies that made a successful $2 billion bid for eBay’s Skype Internet voice division.

The Skype founders are also suing eBay because they believe that they have the sole rights to Skype’s technology and that their firm Joltid alone has the right to revoke eBay’s license. The Skype founders sold Skype to eBay in 2005 for $2.6 billion, but they say they still own Skype’s core technology.

The suit was filed in federal court in Delaware. Index Ventures declined to comment.