JS-Kit, best known for its easy-to-add commenting widget, has acquired Haloscan, another comment service, for an undisclosed mix of cash and stock. The acquisition adds 500,000 blogs to JS-Kit’s reach and makes it larger than the rest of the market, which includes Disqus, SezWho, and Intense Debate, combined.

The company made the acquisition in January and will now begin marketing the rest of its widgets, which include a ratings widget similar to the one below this post, to Haloscan’s existing base. It claims that its widgets, which are used by Sun Microsystems and JetBlue, now have over 19 million users and over 100 million page views a month. It’s not clear, however, how many of these users are active commenters. JS-Kit makes money by placing ads into a stream of comments and shares the revenue 50/50 with the content producer.

In conjunction with this news, JS-Kit has added a “portable profile” feature that strongly resembles the one offered by Disqus. This profile contains all of the posts a commenter has made across any of the sites in JS-Kit’s ecosystem. Despite the fact that this feature is clearly inspired by Disqus (which VentureBeat uses), JS-Kit CEO, Khris Loux, does not hesitate to bash his much-buzzed-about competitor, which he alleges “steals traffic from bloggers” and “is not upfront about its plans to monetize at the expense of its users.” 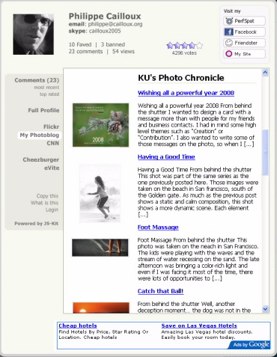 His critiques focus on the fact that Disqus hosts comments on its own servers and site and in so doing, takes away all the benefits that comments could have on a blog’s search engine ranking. Asked to respond to these criticisms, Disqus founder, Daniel Ha (no relation to VentureBeat’s Anthony Ha), points out that his service offers a plug-in that makes it relatively simple to get search engines to index the comments on your blog, itself. Ha also argues that since JS-Kit puts ads in its users’ comments, its monetization plan interferes with the user experience.

See Allen Stern’s post on CenterNetworks for more on the ups and downs of Disqus.