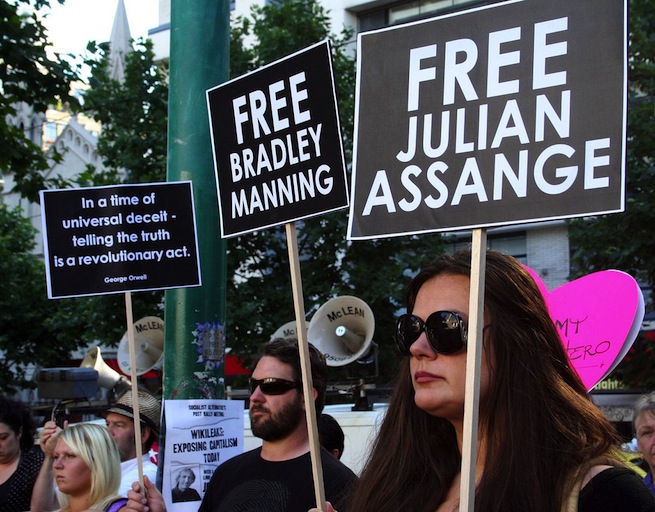 Founder Julian Assange asked President Obama today to “renounce [the United States’] witch hunt” against Wikileaks, the website that published a number of sensitive U.S. diplomatic cables. The speech comes soon after Assange was granted asylum in Ecuador to avoid extradition to Sweden, where he faces trial for alleged sex crimes — charges his supporters say are trumped up.

Assange gave the address from a balcony on the Ecuadorian embassy in London today, where he is sheltering in place after breaking his bail to avoid extradition. Ecuador granted Assange asylum last week, saying his safety could not be guaranteed if he was brought to Sweden. The concern is that Assange could be further extradited from Sweden to the United States, where he faces potentially bigger charges for “Cablegate.”

“We must use this moment to articulate the choice that is before the government of the United States of America,” said Assange in his speech. “Will it return to and reaffirm the revolutionary values it was founded on, or will it lurch across the precipice, dragging us all into a dangerous and oppressive world in which journalists fall silent under the fear of prosecution and citizens must whisper in the dark?”

The Cablegate scandal occurred in 2010 when Wikileaks published large numbers of confidential U.S. diplomatic cables from the military. The cables exposed a number of proprietary and embarrassing communications to the world. Wikileaks is known for publishing sensitive information like this and most recently published a slew of internal Syrian government emails.

Assange went on to talk about Private Bradley Manning, who is in jail in the United States for allegedly leaking those U.S. cables.

Assange was rewarded with cheers from the crowd. Thus far Manning has been to a hearing but has not been officially tried in court. During his speech, Assange called Manning “one of the world’s foremost political prisoners” and a “hero.”

A prisoner himself, Assange was surrounded by U.K. police, who are waiting to arrest him if he steps on U.K. ground. As Wired notes, U.K. Foreign Secretary William Hauge said the country does not have to honor his asylum as the U.K. “does not accept the principle of diplomatic asylum” and promised the Wikileaks founder will have trouble leaving the country. Indeed, the U.K. threatened to enter Ecuador’s embassy last week, though it did not.

“Inside this embassy after dark I could hear teams of police swarming up into the building through its internal fire escape, but I knew there would be witnesses and that’s because of you,” said Assange. “If the U.K. did not throw away the Vienna Conventions the other night, it is because the world was watching. And the world was watching because you were watching. So the next time somebody tells you that it is pointless to defend those rights that we hold dear, remind them of your vigil in the dark before the embassy of Ecuador. Remind them how in the morning the sun came up on a different world and a courageous Latin American nation took a stand for justice.”

via The Washington Post; Free Julian Assange image via Takver/Flickr