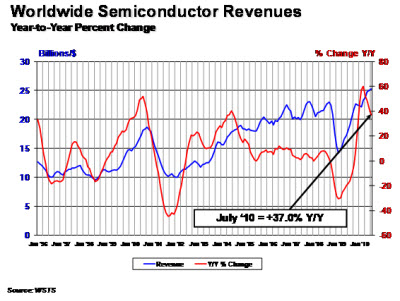 July semiconductor chip sales grew 37 percent from a year ago to $25.2 billion. But the monthly gain was just 1.2 percent above June sales of $24.9 billion, according to the Semiconductor Industry Association.

The chip industry’s trade group said that year-to-date sales are $169.2 billion, up 46.7 percent from $115.3 billion in the first seven months of 2009. The numbers are closely watched because chips are used in everything electronic, from computers to smartphones and consumer electronics. They are a bellweather for the overall economy.

All monthly sales numbers represent a three-month moving average. In June, sales were up 47 percent from a year ago.

He added, “Although recent public statements from a number of major manufacturers have emphasized limited visibility for the near-term, we continue to expect that industry growth for 2010 will be in line with our mid-year forecast of 28.4 percent.”

Toohey’s comment is a reference to Intel’s revised downward forecast, which was lower than analysts and the company had expected due to the downturn in the economy.

In other words, the fast growth of the first half of the year will be tempered by slowing growth in the second half. The year ago numbers have been easy for the industry to beat because the world was locked in the financial crisis for much of last year. Since that time, the industry has benefited from a recovery in the tech industry.