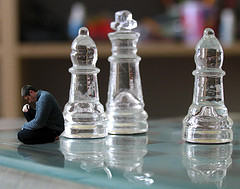 Ever since Apple’s chief financial officer, Peter Oppenheimer, referred to a “future product transition” during the company’s most recent earnings call, the tech news world has been abuzz. The most frenzied speculation has centered around a revision to the MacBook line. For some, the future holds a touchscreen MacBook or an ultra-portable tablet. Others envision a MacBook with a souped-up multi-touch touchpad made of glass positioned below or next to the keyboard. Since marginally informed speculation is the name of the game, I’m going to throw in some chips and say that most of this is likely off the mark.

Apple is out to send earthquakes through the market, make our jaws slacken and cash leap from our bank accounts and into its own. But I’m not sure any of the suggested possibilities would do this: A tablet, while still possible (even probable at some point) is too niche to be a huge deal, a larger multi-touch touchpad won’t knock many socks off and, for now, at least, 12-17″ touchscreens cost too much to make sense for all parties involved.

So what could Apple do that would compel Oppenheimer to speak of dramatic transitions and warn shareholders of an impending decrease in profit margins? Simple: It could take multi-touch to its logical next step, do away with the mouse and physical keyboard, replace it with one or two touchpads and change the way we interface with our machines.

Some people speculated about a multi-touch combination keyboard/touchpad when Apple released a patent for a dynamic touch surface last Fall (more on this later), so it surprises me that amidst all the speculation, this concept has not come back. VentureBeat’s MG Siegler has suggested that Apple would come up with some sort of next-generation interface and wondered about the relevance of a mouse when “you have the whole world at your fingertips?” A look at the string of Apple’s multi-touch patents strongly suggests that giving us a laptop that answers this question is the company’s goal.

We’ll start with the most obvious one: A patent for a wide touchpad on a portable computer. This diagram from the filing tells the story: 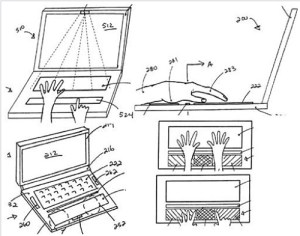 You can see that there are numerous possible configurations for such a device and, yes, one of them has both a keyboard and a large touchpad.

While this is certainly possible, Apple has a grander vision, one outlined in a series of patents for an all-purpose multi-touch input device. Designed by Wayne Westerman, the interface designer Apple brought on when it acquired Westerman’s company, Fingerworks, these patents detail a system for typing and controlling the computer on the same surface. 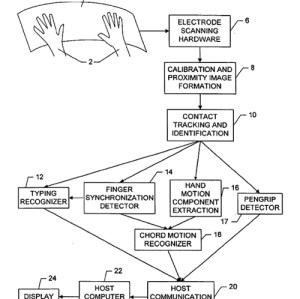 Westerman’s words from one of these patent applications are even more telling: “the user should not need to provide explicit mode switch signals such as button presses, arm relocations, or stylus pickups before switching from one input activity to another.” In other words, Westerman envisions an interface that doesn’t require us to move our hands beyond their home position, ever.

This is a wonderful concept, save for one looming problem: Typing on a flat surface is far from ideal. Indeed, a study from the Human Factors and Ergonomics Society found that people typed less efficiently and less accurately on a multi-touch keyboard and found the process unpleasant. But, as others have pointed out, Apple has thought of this, too. In two patents, “keystroke tactility arrangement on a smooth touch surface,” and “force imaging input device and system,” the company outlines a number of ways the problems of typing on a flat surface could be overcome. 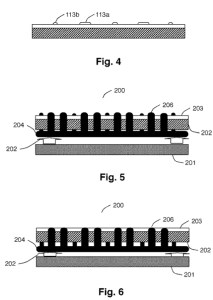 These diagrams suggest some of the possibilities. Figure 4 represents slightly raised bumps, much like those that define the home keys on conventional keyboards. Figures 5 and 6 represent a more dynamic system in which the surface actually changes with the way you’re using it. When you’re typing, you get pressure-sensitive feedback. If you’re gesturing, you just feel a smooth surface. It would not be easy to make this a seamless experience, but if there are designers that could pull it off, they are probably working for Apple.

Last is the recently published “multi-touch gesture dictionary,” patent application, which details how to use a combination of fingers and gestures to initiate a wide range of commands. There are a set number of possible motions and the set of commands change based on the number of fingers that touch the surface at the same time. The range of possible gestures and finger combinations seem to handle everything we currently do with a mouse. 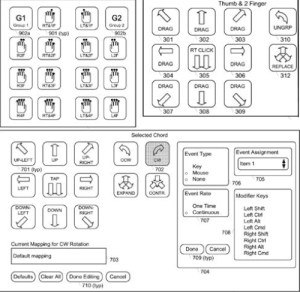 So there you have it: a theory for the next generation of computer input, derived without shady tips and composed entirely of marginally informed speculation.

“Apple,” Oppenheimer said on the earnings call, “makes state of the art new products that the competition just can’t match.” If Apple actually eliminates the physical keyboard and mouse duo and does it brilliantly, the competition will find itself more than outmatched. It would be in checkmate.