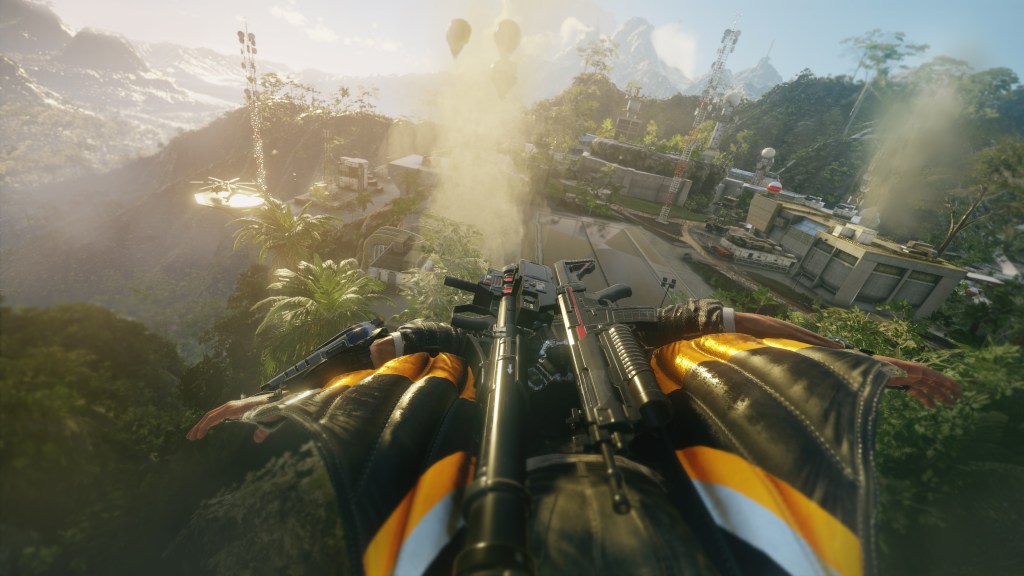 Above: Just Cause 4 wingsuit.

GamesBeat: Where do you like to draw your lines as far as making it realistic or making it ridiculous?

Supino: [Laughs] It’s a fine balance, right? We do go over the top in some ways, but I think that’s where we have our sweet spot. It feels like it’s grounded in a certain reality, something you recognize, but at the same time, when it escalates, it becomes an action-packed adventure. We know our audience, and we know what they’re looking for. We try to make our features in service to them as much as possible while also having some consistent underlying logic to it.

We don’t like to throw things to just throw things in. “Hey, that sounds like a cool idea.” There has to be a consistency there. As an example, if an object acts a certain way — if a piece of metal of a certain type breaks, say — we believe that has to occur everywhere else in the world. Nothing ever feels illogical in the way that it happens or a one-off happening.

Supino: Yeah. We use real physics simulation, but then, we’ll tweak the values a bit to be more on the fun side. We’re not making a simulator, right? We’re making a fun open world sandbox game. That’s where a bit of the art comes in. You have to have that feeling. That’s something I think we excel at. The feeling of wingsuiting, the feeling of parachuting, the feeling of destruction, the feeling of everything that happens physically in our game, it’s unparalleled, to be honest. It’s so fulfilling when something is physically reacting to you in our game, or you’re executing something that’s impacted by physics. That’s where we excel in a lot of ways, that feeling. It’s hard to put into words, but you know it when you feel it.

GamesBeat: I was watching the IGN video of the merry-go-round.

Supino: That was a great one. We have a destruction designer here, and when we make objects for him — like, how can we make this something that works with the grappling hook in a cool way? What objects would be fun to mess with? A lot of our marquee objects, we look at them again and again, and if ever at any point we run into something that doesn’t feel great — we go for quality over quantity for sure.

We did the merry-go-round, the pirate ship, and the Ferris wheel, and we said, “You know, if that merry-go-round doesn’t speed up if you put boosters on the horses, that’s a failure.” So, we made it react that way. We looked at the pirate ship and said, “If you put balloons on it, it should float to the top, so you can make it go around the world.” Or, we have this wind gun weapon that shoots wind. At first, it’s a bit game-ey — you shoot it, and people blow away — but then, you realize that the entire world interacts with that weapon. That’s when we’re having the most fun.

GamesBeat: I also saw the balloons on the flying bus.

That’s one of the ways people will navigate the bus in the air. The other way is they’ll attach boosters to the back, and they’ll steer it in a way that’s similar to the rocket ship. They’ll push it forward as it’s floating or a little left or right depending on what input they press. You can get these weirdly functional vehicles. The most common one is probably the tank. It becomes a pretty good weapon. It’s beefier than a plane, and it has this massive cannon. It’s not a bad strategy to use that going into a base. It’s funny, but it’s not a terrible strategy.

GamesBeat: Do you have the same kind of computing power here as in Just Cause 3, or can you get more out of the consoles now?

Supino: We have a brand new engine, the Apex engine. It allows us to do crazy new physics stuff. It allows us to use our platforms in a more performant way. It’s been a dream in terms of comparing the two, 4 versus 3. We’ve really listened to feedback and been able to focus on getting the most out of each of the platforms while also doing a great experience.

That’s hard to do, when you have dynamic stuff like tornados ripping through the world, and you’re not entirely sure when it’s going to happen. You’re not sure how many objects that’s going to pull up. It’s been incredible in that way, that we’ve been able to pull that off.

Supino: The big thing is, we wanted to pick up where the last one left off. We wanted to tell a different side of the story about Rico and give the world of Solis a life of its own. I think we did that. We had the player experiencing an interesting and captivating story. We spent a good deal of time focusing and trying to make it as thoughtful and supportive of an open world experience as possible, which is hard to do sometimes. 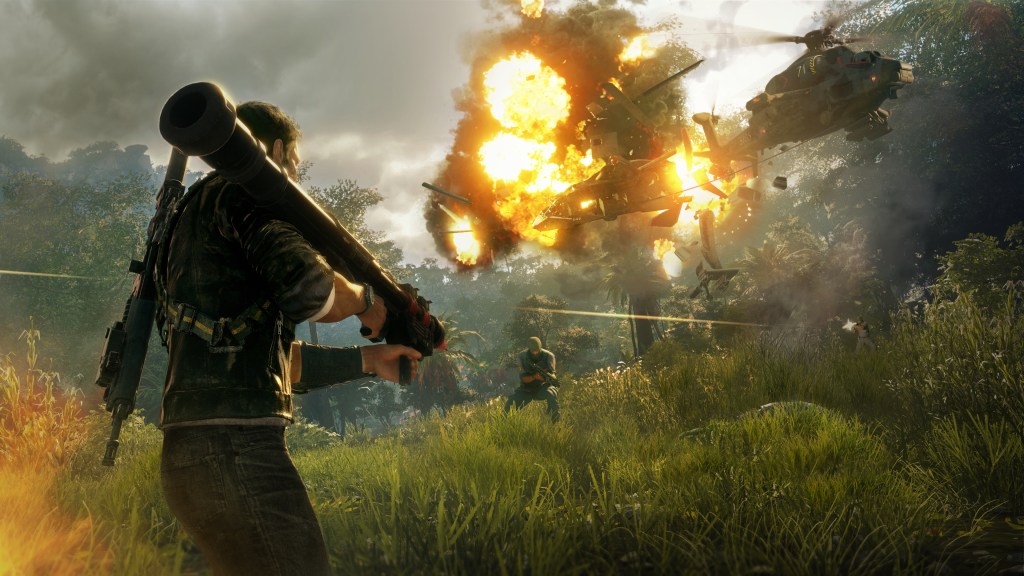 Above: Just Cause 4 rocket helicopter.

GamesBeat: You don’t have a 105-mission story like Red Dead.

Supino: [Laughs] An open world is an interesting place for a lot of reasons. It’s caused us to ask a lot of interesting questions as we go through the game. How do we tell a story without overburdening the player in that way? There are different styles. We look around us and see other games — we always look at each other kindly. There are so many impressive things happening right now in the space.

GamesBeat: Are there any other things you’ve seen players do that you hadn’t expected?

Supino: There’s a guy — I wish I could remember his name — but he’s been messing around with the supply drop system, which allows you to drop a vehicle in. He’s been doing weird things like dropping multi-car ferries from a cargo jet. Physically, maybe, that doesn’t make the most sense, but he drops them from the air into the top of the tornado. What happens is, the container that the ferry is in is much smaller than the ship itself. It spins around in the tornado, and then, all of a sudden, the contents pop into existence. This massive ferry appears and continues to get lifted and ripped apart all across the tornado.

We also have some seesaw-like objects in the world. He’ll stand on one end of the seesaw and then drop a 747 on the other end, shooting himself up in the air.

GamesBeat: You can build your own Rube Goldberg contraptions.

Supino: Right. People are getting really elaborate. Some of the coolest stuff — our player mechanics are really strong when it comes to being able to switch between parachute and wingsuit and things like that. When people are really good at the game, it’s another level when it comes how fluidly they’re able to move through the world. You look at things like, someone will get in a vehicle, go 100 miles an hour, go off a jump, get on the hood of the car in midair, tether the car to a building, retract, get back in the car, and then, he’ll break the cable. It’ll slingshot the car in the opposite direction and land back on the highway going the other way. All that happens in about seven seconds.

You see people do these things, and you think, “How do they do that? How can they move so quickly?” It’s cool to see, in these early videos coming out, the types of things people want to do.

GamesBeat: Have you heard any really interesting or surprising feedback yet?

Supino: I think we take it for granted, when we’re working here — we’ve been working on it for a while — that this thing can be pretty incredible. But when we see people see the tornado for the first time, we take a step back and realize, “This is really cool. There is no comparison to this.” It makes us proud, to see people taken aback by something they haven’t seen before. I think that’s the Avalanche brand. We take risks and try things out. It’s really paid off for us.

When we’re in rooms and watching people play during the lightning storm, something like that, and there’s good audio going — the lightning strikes, and you can feel it in your chest as it blows up a fuel tank right next to you, or a helicopter comes in, and lightning strikes that — you get this feeling that it’s all coming together. All these systems we built are coming together in the way we expected them too. Then, you see people play it, and they’re impressed by it. “Hey, we did what we set out to do.” That’s awesome.

Above: Rico surveys the lands of Just Cause 4.

GamesBeat: Do you have any recommendations for what people should try as they’re starting out?

Supino: You definitely want to start the game and do the initial backer quests, get all the initial grappling hook options out of the way. Once you do that, fly around and do whatever you want, really. You can engage in the grasslands if you want to mess around with the tornado. You can go to the rainforest if you want to mess around with lightning. There are so many weapons to unlock, and all of them have secondary fire. You can do some funky things with those as well.

Just play through the world and mess around. That’s the fun of it, really. The campaigns and quests are great, but I think every player will find their own preference. I think the best thing you can do is finish those intro areas and then just go out in the world and figure out what you want to do. It’s up to the players. But I would say the game becomes more fun for me personally once I have more of the grappling hook features available.

GamesBeat: How many years did this take to get done?

But trying to create a tornado or lightning — there was no recipe to follow. It was a lot of trial and error, breaking down what it means to make a good rainforest or what it means to make a good tornado. It’s a difficult process. No one has the answer. You just have your best guess, and you go in that direction. If it doesn’t work out, you go back to the drawing board. We had to do that a few different times. It’s been a tough but rewarding couple of years. It ended up better than we could have expected.