Justin.tv, a site that features streaming videos of personalities running around with live cameras, has launched tools to let anyone play their own live broadcasts on its site.

It has also announced an undisclosed round of funding from Alsop Louie Partners.

The San Francisco-based company began letting users participate in May [update, see comments: selling them its proprietary backpack of video hardware]. It is now offering users a path to fame through any a computer with an internet connection, and a web camera.

It competes with Ustream, Kyte.tv, Mogulus and others — each of these companies is inevitably set up as the YouTube of live, streaming video.

Like YouTube, these live streaming sites want to replace tradition television programming. The medium works especially well in settings where you might otherwise see a live camera action: Man-on-the-street interviews, hot dates, parties and other events (sample below).

Justin.tv has already featured musicians, artists, models, presidential candidates and other celebrities, and a select few of its own fans to help set the tone. Now, it hopes to attract a critical mass of live streamers that users will want to watch on a regular basis.

However, live video streaming is still emerging, both as a technology and as a business. Sometimes, such new mediums aren’t as significant as their proponents hope. For example, PodTech began as an audio podcasting company featuring demi-celebrities doing interviews, product demos and other geeky stuff — then it moved to do videos of the same things. That company has struggled to attract a large following and make money. Recently, its chief executive stepped down and a couple popular video personalities have left.

Live video streaming is expensive and hard to do at high resolution.

Justin.tv has made significant progress on improving its technology. The company has spent months building a custom Flash-based live video server and accompanying chat server. Its own handiwork, plus Amazon’s Elastic Computing Cloud (EC2) service for online data storage, has allowed the company to lower video-serving costs from a market rate of around $0.36 per user per hour to under a penny per user hour, it tells NewTeeVee. The company is also using On2’s video compression technology that allows for high video quality even on poor internet connections, reports Techcrunch.

Justin.tv has been making money through sponsorships and events. 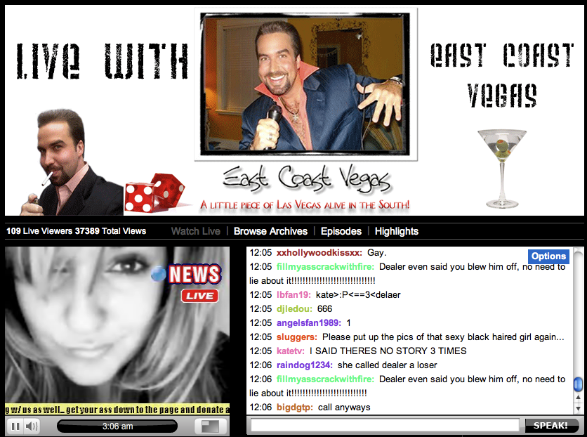