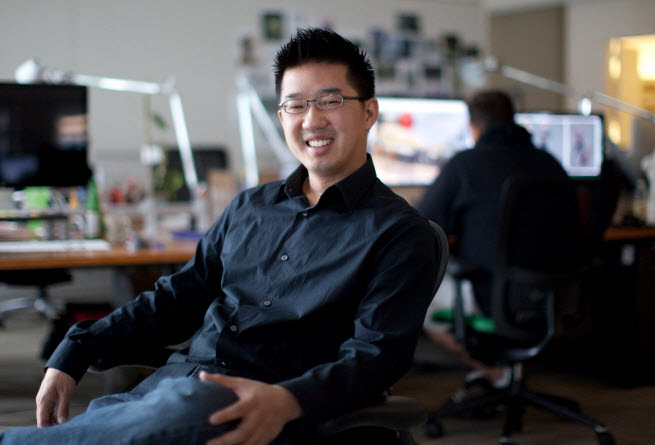 Kabam made its mark in social games on Facebook, but the company is rapidly diversifying away from the social network as it pursues fans of hardcore social games. 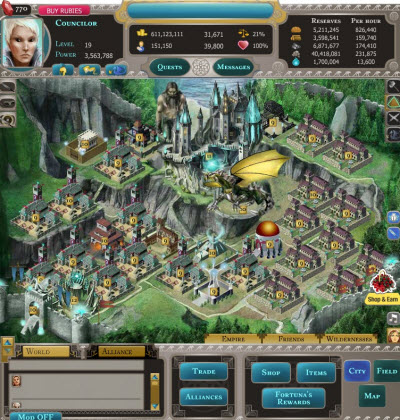 Kevin Chou, chief executive of the Redwood City, Calif.-based company, said in an exclusive interview that the company has now moved its games onto a total of six platforms and it has made some big strategic shifts.

Today, the company is announcing that it will make its games available on Kongregate, the independent game portal owned by GameStop. In doing so, the company is taking its destiny into its own hands, in contrast to Zynga, the social gaming giant which depends on Facebook for more than 90 percent of its revenue.

“Of the new users coming into our games now, the vast majority are coming from outside of Facebook,” Chou (pictured above) said. “In January, we hit a new record for user and revenue numbers, by far.”

While other companies targeted casual gamers on Facebook, Kabam had the unique insight of targeting hardcore gamers, who are also present on the social network. Those gamers are loyal. About 90 percent of them play six days a week. And they spend a lot more money, on average, than your typical user when it comes to buying virtual goods in games. For some of these players, paying just $60 for a console game would be a bargain compared to what they spend in Kabam’s games.

In two years, Kabam’s Kingdoms of Camelot generated $85 million from 15 million players, which makes it one of the top eight strategy franchises of all time. Kabam’s own study showed that social games have taken users away from console games.

Kabam will be launch three of its free-to-play games on Kongregate, including Dragon’s of Atlantis (pictured right). Kongregate has more than 16 million monthly unique visitors, many of them dedicated gamers who are looking for something different to play. Additional Kabam titles The Godfather: Five Families and Thirst of Night are also planned for Kongregate.

The other networks where Kabam is getting users include Google+, Pokki on the Windows PC, and its Kabam.com web site. By moving onto the other platforms, Kabam is searching for both better economics and more core gamers. It is also building its infrastructure so that it can support players in one game universe, so that its games will be playable across platforms and will eventually have simultaneous updates. Chou said this until-now secret game universe has absorbed a lot of Kabam’s investment resources. Chou calls this is “pyramid strategy,” where the game universe supports multiple platforms, simultaneous play, live service, and a single game engine.

“Some of these platforms also actively push your game to new users,” Chou said. “That changes the economics.”

It makes sense for Kabam to move beyond Facebook because it targets hardcore gamers, who are a minority of the game players on Facebook. Kabam could spend a lot of money on ads on Facebook, but the universe of possible players was small. So Kabam is seeking out the hardcore gamers on other platforms where they are present.

That has led to a decline in Facebook users. In August, Kabam had more than 12.9 million monthly active users on Facebook, but that number has shrunk to 2.0 million, according to AppData. Meanwhile, the cost of advertising on Facebook is rising.

“We tried to work with Facebook to make the economics work better,” Chou said.

Kabam had a small layoff (restructuring) as it realigned its business units to position itself for a multiplatform  business. But Chou says that rumors that the company is going downhill are incorrect. The team still has more than 450 employees and it just acquired a new headquarters in San Francisco. Chou is using a far different playbook for his business compared to Zynga. While Zynga has 56 million daily active users, Kabam has about 1 million DAUs.

“We don’t design our games to spam your friends,” Chou said. “I’m excited because we are the only company that is seeing the business this way and is executing on lots of platforms.”

Quarterly bookings are up ten-fold since early 2010. The key isn’t about how many users you have, Chou said. It’s about how much money you are making.

“The business is healthy,” Chou said. “Our pyramid strategy is operational now and we feel good about how the technology is scaling across multiple platforms. We have spent 12 months building some unique technology.”

Chou promises big things in 2012. He said the company has been making big investments in console-like 3D 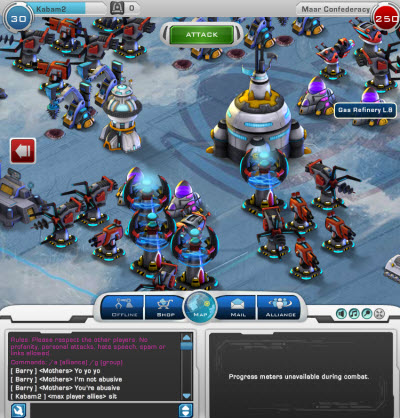 games and he believes these games will make a big mark on social networks and web sites in 2012.

“3D will come to the market in a big way,” he said, based on progress that other companies have made with technologies such as Unity 3D, Adobe Flash 12, and Google’s Native Client for Chrome. “The biggest knock against social games so far is that the graphics are nowhere near what can be done on the consoles. They forget that the technology is changing at the pace of the internet. We can deliver a quality experience.”

The new social games will have “next-generation quality” levels, with more synchronous play, where players act in real-time as they compete against each other. The company will also announce more major partnerships this year.

“We’ll announce deals with brands that will put Kabam in a whole different category as a game company,” Chou said.

And Chou said the company is also investing in mobile games, which is exciting because it is growing so fast.

“We don’t  have a product we are ready to talk about but we will have something innovative in that space,” he said.

Kabam was founded in 2006 as Watercooler and funded by Betfair and Canaan Partners. It had around 20 employees for quite a while as it experimented on Facebook, making sports fan pages and sports games. It had a big hit with its first major role-playing game, Kingdoms of Camelot, which quickly pulled in millions of users. Kabam also acquired WonderHill, a San Francisco game company that developed Dragons of Atlantis, which has become Kabam’s most successful game to date. Kabam also recently bought Fearless Studios, which was run by ex-Star Wars game developers. Kabam raised $125 million to date.

Kongregate’s users play more than 28 million hours a month and the company has more than 53,700 games on its portal. Jim and Emily Greer started the company in 2006 and sold it to GameStop in July 2010.