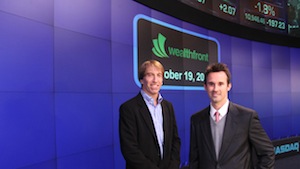 KaChing, a startup backed by partners from some of the best-known venture capital firms, just celebrated the one-year anniversary of the launch of its investment website by revamping its site and announcing a new name — Wealthfront.

The Palo Alto, Calif. company says its goal is to “democratize” the fund management industry. Using a strategy that Wealthfront says it borrowed from the endowment funds of Ivy League universities, the company selects top managers who are able to beat the market, then it allows its target user base (the “mass affluent” with between $100,000 and $1.5 million in financial assets) to invest with them.

Normally, these managers would require a minimum investment of $500,000 or $1 million, but with Wealthfront the threshold is just $10,000. The process also has more transparency than a standard mutual fund, Wealthfront says, because you can see the manager’s investments at any time, not just at the end of the quarter.

To reflect a growing emphasis on serious investing (rather than social investing), the company has chosen a new, more professional name. Its redesigned site also includes new features like recommendations for which managers are a best fit for your financial goals and risk tolerance. It announced that there are more than 25 managers in the system, which now has more than $100 million under management. Oh, and the founding team got to ring the closing bell at NASDAQ today, as pictured above.