If the idea of using a controller to run in VR strikes you as old-fashioned, Kat VR’s upcoming Kat Walk Mini is going to excite you. The company has just released a new video detailing its compact omni-directional virtual treadmill, which looks like it’s straight out of Ready Player One, and promises compatibility with every major VR platform currently available.

Kat Walk Mini combines a 4.9-foot-wide square black platform with a 5.2-foot-tall rotating back support, using the support and foot sensors to track a player’s locomotion and rotation. Supporting one person up to 6.5 feet tall and weighing as much as 286 pounds, a shock-absorbing trampoline-like surface lets players comfortably walk, sprint, run, crouch, and lean back during games.

Notably, Kat Walk Mini radically reduces the weight and footprint of the company’s original Kat Walk model, which debuted on Kickstarter in 2015 and fulfilled backers throughout 2016 and 2017. The Mini unit weighs 187 pounds, less than half the 421-pound original model, and is more than four feet shorter, as it doesn’t use a basketball hoop-style back support system. It’s closer in design — but not in execution — to the Virtuix Omni Treadmill. 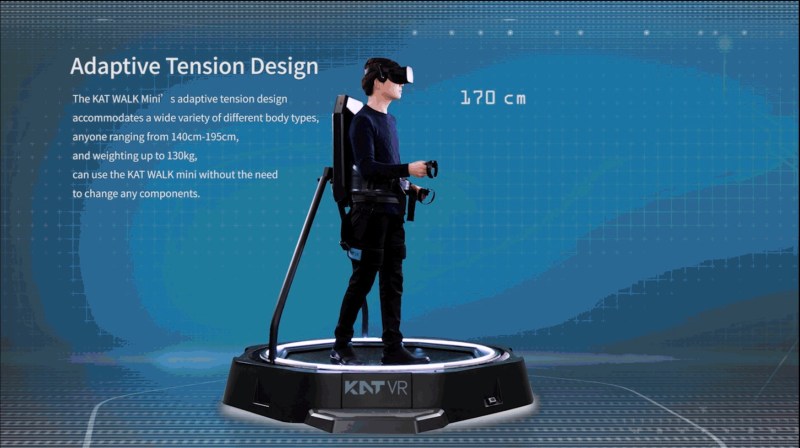 Despite its smaller size, Kat Walk Mini benefits from technology improvements made throughout development of earlier models. It apparently uses a contactless sensor with “accurate foot location tracking” and a “much lower delay” than the original Kat Walk accessory. Additionally, the foot sensors are powered directly by the machine rather than separate, so they don’t require recharging or pairing.

Compatibility generally sounds impressive, as well. Kat VR says that Kat Walk Mini will work with everything from the HTC Vive and Oculus Rift to the PlayStation VR and Windows Mixed Reality headsets. Supporting the platform is claimed to be simple — an open SDK will be offered to let developers integrate support, and games supporting free locomotion apparently work already. That includes Doom VFR, Skyrim VR, Resident Evil 7, and other titles.

The biggest open questions are pricing and availability. Having already shipped larger, heavier versions of Kat Walk, Kat VR recently took to Reddit to answer questions ahead of a planned Kickstarter round for Mini. Pricing is promised to be “affordable” for “the average consumer,” which Redditors believe will fall under the original model’s $600 price for most Kickstarter buyers. KatVR previously ran a little behind early projections on shipments of the first model, but did in fact deliver products — something that shouldn’t be taken for granted with any Kickstarter project. The company advises potential backers to watch the product’s official page for more details.