Keeper Security, whose platform promises to prevent password-related data breaches and cyberthreats, expects to close (but hasn’t yet officially closed) a $60 million growth financing round sometime this week. The company says it will use the funds to accelerate its go-to-market efforts and acquire new customers globally.

Data breaches can be crippling for businesses. According to IBM, the global average cost of data compromise is $3.9 million, and typical breaches at publicly traded companies are estimated to cost $116 million. The vast majority of these breaches are preventable — consultancy Willis Towers Watson finds that over 90% of cybersecurity breaches are due to human error. But more than 77% of organizations don’t have an incident response plan, and most targets take six months to detect even large breaches.

Keeper claims to mitigate the risk of such breaches, but it’s worth noting the company’s problematic track record. Just over two years ago, the company filed a frivolous lawsuit against Ars Technica reporter Dan Goodin that Techdirt characterized as “an attempt to stifle negative press about a pretty bad flaw.” In response, a number of security experts including Georgetown University’s Matt Blaze, Wired senior writer Andy Greenberg, and Electronic Frontier Foundation general counsel Kurt Opsahl suggested people stay away from Keeper and its products, regardless of their technical merit.

Keeper’s solution creates random, high-strength passwords for websites and apps it stows in secure vaults across devices. Each employee gets a private, encrypted vault for storing and managing their passwords, credentials, files, and private client data. (Employees can encrypt any type of file or metadata, including private keys, digital certificates, notes, lists, codes, confidential documents, and media files.) From these folders, they’re able to share files and passwords with teams or individual users and customize permissions. Employees can also access a history of their records, view previous versions and changes, and recover records on demand. 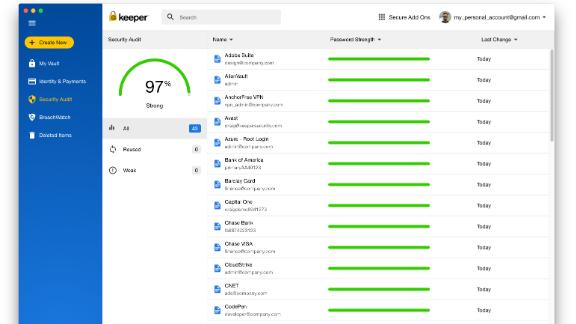 Keeper also offers a cross-platform encrypted messaging service — KeeperChat — on devices with group chats, a protected media gallery, and the ability to retract and schedule self-destruct timers on chats and attachments. There’s a reporting and alerts module, and a dark web monitoring tool called BreachWatch that provides a risk assessment of passwords in vaults and a summary view of breached password status. Integrations with remote connection tools enable Keeper to autofill passwords and other info from vaults in remote sessions, while a customer isolation feature allows users to independently provision, manage, and monitor multiple customers with compliance, reporting, and control.

Keeper claims to have “millions” of individual customers and thousands of business clients in over 100 countries, many of whom joined the platform within the past year. CEO Darren Guccione says this investment round, which was led by Insight Partners and is the company’s first since its founding, will enable Keeper to add to the 120 team members it hired in 2019.