A week ago, Africa tech blogger Erik Hersman read a post by Kenyan tech and human rights blogger Ory Okolloh calling for a web application to track incidents of violence and areas of need during the post-election turmoil in Kenya.

Within a few days, Hersman had organized Okolloh and a couple of like-minded developers in the U.S. and Kenya to make the idea a reality. The result is Ushahidi.com (Ushahidi means “witness” or “evidence” in Swahili).

Five days after launch, the site has had more than 13,000 page views, with more than two dozen reports published so far.

This isn’t our typical VentureBeat story, but it’s a timely one, especially with things as grave as they are in Kenya right now — and shows how innovation and entrepreneurship comes in many ways.

The site lets anyone on the ground in Kenya fill out an incident report (riots, deaths, looting, etc) either online or via text message. It then has volunteers attempt to verify those reports either with the media or with local NGOs, and displays the incidents on a Google map. Visitors to the site can click on any incident to get more detailed information.

Ushahidi.com is very much a labor of love. Its developers built it and are running it with no financial interest. Hersman expects to register the site as a non-profit and draw in donations to help keep it going. He and his co-developers currently rely on local Kenyan NGOs to help report and verify incidents, although NGO reports sometimes come in “unofficially,” since some of these organizations are reluctant to openly contradict government reports. And Hersman hopes that his group will be able to develop relationships with more NGOs going forward so that the site provides more thorough coverage of what’s happening.

Today, the site posted an as-yet-unverified report that a large number of orphans in Nairobi have scattered from their NGO caregivers, who’ve been overwhelmed by the surge of chaos. A January 9 report out of the town of Kisii asks people to transfer phone credits to help pay for gas needed to transport displaced people back to their homes.

Hersman, a web strategy consultant based in Orlando, developed the structure of the site, and David Kobia, an Alabama-based programmer, coded the site. Kenyans Okolloh and Daudi Were handle relationships with the NGOs, while Kobia and Hersman handle day-to-day operation of the site.

Hersman, the son of missionaries, was raised in Kenya and Sudan. He writes about African web and mobile startups in his personal blog, WhiteAfrican.com, and also runs a popular group blog called AfriGadget that has multiple African contributors who focus on helping Africans solve Africa’s problems. After growing Ushahidi in Kenya, he hopes to develop a global site to handle crisis situations anywhere in the world. The technology to do so, he says, is already available.

Here are requirements for such a site, he says: A map, incident pages, sorting by category, image and video hosting/embedding, opportunities [for donors] to help financially. He and Kobia have put together an executive summary for such a global site and are looking for funding. After getting a few thousand dollars, he and Kobia will be able to launch a web site in just a couple weeks, Hersman says, but will still need donations to help support the project.

For other coverage of how Kenya’s technology infrastructure is causing it to handle its problems differently from other African countries, see our recent article on citizen reporting during the election riots. 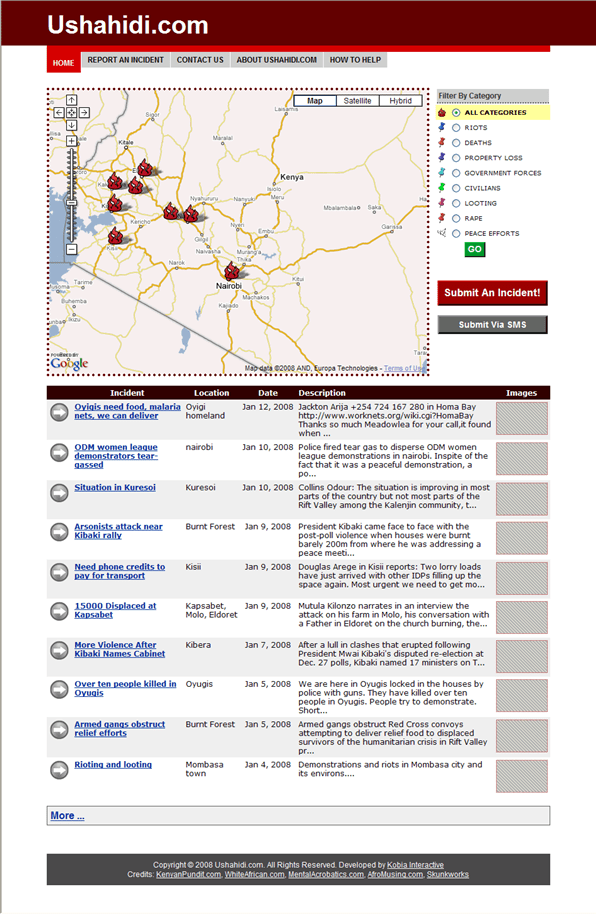