When we started E.piphany there was an equally scrappy startup called DoubleClick (later acquired by Google for $3.1 billon). Over the years Kevin O’Connor, former CEO and founder of DoubleClick and I got to know each other.  It’s been fun watching a 20th century entrepreneur learn new tricks as he builds his next startup, FindTheBest, using Lean Methodology.

[Disclosure: FindTheBest provides VentureBeat’s product guides, like our smartphone comparisons, and our guide to VC firms.]

Here’s Kevin’s story to date, as told by Kevin himself.

You might say Steve and I have lived parallel lives. We’re both serial entrepreneurs. We’ve both used a combination of luck, hard work, and mild insanity to get where we are today. We’ve both published bestselling books.*

Steve and I have long held similar beliefs about how to run start-ups, even if we’ve used different names to describe the key principles. He came down a few weeks ago to visit our company, FindTheBest, where we chatted about his lean start-up concept and held a Q&A for the FindTheBest team and others in the Santa Barbara tech community. Here’s how our company is following the Steve Blank blueprint.

By 2009, I was fed up. I remember trying to search for the best college for my son and the top ski resort for a family vacation, only to find scam sites promoting a “top 10″ list or “featured” options, meaning they were getting paid to promote them. Visiting each official site took too long, and the information wasn’t always easy to compare (ex: “Net Cost of Attendance” vs. “Resident Tuition per Semester”).

That’s when it hit me: what if there was a site where you get all the best information in one place, and have access to great research tools to help make a decision? What if you could think like an expert on any topic in a matter of minutes, instead of after hours of inefficient web browsing? Granted, the idea was a little crazy. To really be a game-changer, FindTheBest would have to compete against the thousands of niche sites that focus exclusively on a single market.

When we started building the site, we had to assume a lot. We figured our key partners would include consumers (to contribute data much like Wikipedia’s users), manufacturers (to keep their product information updated) and the US government (to supply datasets to power our content). We assumed our customers would be any smart Internet users looking to make a decision—granted, an extremely broad customer segment. We guessed that these customers would find value in the ability to make quick decisions on complicated topics. We hoped to start acquiring customers mostly through responsible, focused SEO, where we would target a variety of high-value search terms and provide relevant, useful content to users.

From day one, we knew our biggest cost would be hiring more employees, but we didn’t know exactly how much it would cost to enter each new market (ex: smartphones, then mountain bikes, then business schools, etc.). By leaning on our technology, we knew we could build cheaply, we just didn’t know how cheaply. We resolved to build out the first dozen comparisons before we started calculating an exact cost per new market.

Regarding revenue, we made a big bet on “purchase intent.” We looked at social sites—like Facebook and Twitter—with huge user bases, but comparably small revenue. We then looked at wildly profitable ventures—like Google or Kayak—noting that their users were much more likely to make purchases. When you enter a search query for “car insurance,” or submit details for a trip to London, you’re much more likely to end up spending money. We hypothesized that FindTheBest, with its focus on making big decisions, would attract the same purchase-minded users found on Google or Kayak.

We didn’t need to spend months researching; we just needed to create a viable product to test these hypotheses against. As we went out and started building, many people thought we were insane, stupid, or both. In fact, some probably still do. 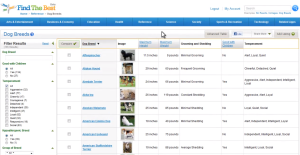 Above: An early FindTheBest screenshot.

Over the next couple of years, several of our hypotheses were confirmed. Thousands, then millions of new customers were coming to the site through SEO, just like we’d guessed with our customer acquisition hypothesis. Our assumptions about cost also proved correct—we were entering new markets incredibly cheaply. Here, we even beat our most optimistic assumptions.

Once we built out a sales team, revenue also started to grow nicely. We’ve confirmed our ability to harness purchase intent, like Google and Kayak before us, verifying our revenue stream hypothesis.

That said, a few of our hypotheses were proven at least partially wrong. First, our assumption that consumers would be a key supplier of content (like Wikipedia contributors) was wrong. While user adds and edits grew at a small rate, it wasn’t nearly enough to support the hundreds of topics on the site. Visitors loved using the site to research new topics, but were less likely to add their own listings or consistently update old content. Our customers had identified a flaw in our original plan. We realized our internal team would need to be bigger, and adjusted our business model canvas accordingly .

Additionally, our value proposition needed adjustment. We had focused on quick decisions, when really, users wanted a sophisticated research tool for making carefully considered decisions. As a result, we’ve had to adjust our positioning and messaging to better capture the value users see in our product. We’re now promoting FindTheBest as a research hub that helps you think like an expert, much closer to what users were telling us in feedback surveys.

At FindTheBest, we constantly practice a “test-fail-learn-test-succeed-scale” approach, which is simply another way of describing the philosophy of “agile development.” We’re happy to fail, as long as we do so quickly, learn the appropriate lesson, and move to a new hypothesis. Once we find one that works, we scale the hell out of it.

For example, we tested out two features early on that didn’t end up as popular as we’d wanted: video guides (a how-to video about researching the topic) and green guides (an environmental report on which products and services were most eco-friendly). Each time, we hoped to capture a new audience by appealing to a specific subset of Internet users. We rolled them out on a limited number of pages to test. Once we saw that these new guides weren’t attracting significant visits or creating increased interaction, we quickly ended the projects.

On the flip side, we’ve had many major successes that have helped inform our product’s direction. Sister sites FindTheData (a site for researching huge datasets on topics like crime, salaries, and government spending) and FindTheCompany (a tool for finding key information on millions of companies and organizations) have grown user bases of several million visitors per month. We’ve found that people love our platform and use our technology for doing research in a variety of different ways.

At just 3 years in, FindTheBest is real-time proof of Steve Blank’s lean start-up blueprint. Even as we make the transition from startup to established company (which I call “company puberty”), we’ll continue to test our hypotheses, seek customer feedback, and test before we scale.

Hopefully we’ll find that FindTheBest will have a bigger exit than DoubleClick – this time as a Lean Startup.