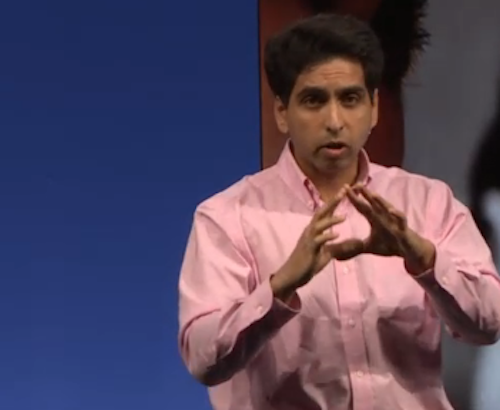 BURLINGAME, Calif: Salman Khan, founder and CEO of Khan Academy, spoke this morning at the NewSchools Venture Summit on his vision for education in 2028.

Khan drew a terrifying comparison between factory workers on the assembly line, who move when a bell  rings every hour, and today’s classrooms. The educator-turned-entrepreneur said that what we need now is a “very large creative class,” meaning students who are passionate about learning a variety of subjects.

“It’s no longer about sitting passively and not questioning authority,” he remarked. “You have to be able to question authority.”

Khan Academy is best known for its computer programming and design courses, but it offers thousands of instructional videos. The goal is to help students and adult learners pick up new skills at their own pace.

“We won’t have five thousand people who can help on cancer research. We will have five million people,” Khan predicted, and was met with applause from the audience of teachers and ed-tech entrepreneurs.

Khan concluded his talk by making the promise that his “dream” will seem a lot more reasonable and mainstream in 2028. “This thing we call education will be widespread and a human right,” he said.