Tabletop versions of Atari Pong used to be the rage in the 1970s. And now a team at Calinfer in Uruguay is reproducing what was once an electronic game as a real-life mechanical game that is akin to an air hockey table.

The Atari Table Pong Project is now in its final days of its Kickstarter crowdfunding campaign. So far, 214 backers have pledged more than $223,000 of its goal of $250,000 in an all-or-nothing campaign. Clearly, some people are in love with this retro idea that brings the past back.

Gerardo Orioli, who lives in the Bay Area and is working on the project with Daniel Perdomo at Uruguay-based Calinfer, said in an interview with GamesBeat that the project is an homage to the retro days of gaming, based on the process of taking the digital to the physical.

“What I liked about the Pong games was that a lot was left to the imagination,” he said. “You could fill in the blanks. At first, this was just a hobby. This was more like an accident. We never planned it, but we were fans of Atari and here we are.”

They built the original as a tribute to Pong, and they loaded it with retro sounds, bouncing lights, and mechanical game, uh, mechanics that mimicked the original.

It uses a combination of magnets, electric motors, mechanical system of rails and poles, leads and electronics. The motors drive the magnets under the play-field with a mechanical device on rails and pulleys. On the surface, the short bars and square simulate the two-dimensional interface of the original game. 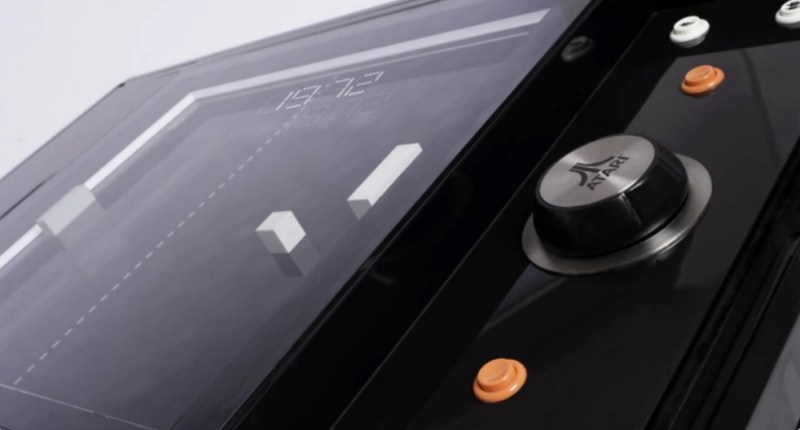 The challenge was to control the ratio between mechanical forces and speed against the magnetic fields so the ball remains engaged, and to recreate the illusion of the movement as close as possible to the original 2D game.

“It’s a physical representation of a digital game,” he said. “It’s almost like a sculpture of a good painting, in a different medium. We created the motion with the mechanics and magnets underneath. It’s not that we are against digital. But this is more like a step back. Like a statement, that we want something we can touch.”

The coffee-pong table comes not only with the game but also a classic digital clock displayed on its top, USB ports mounted on the rack, and a way to play streaming music via Bluetooth. Atari licensed Pong to Calinfer.

Calinfer is also planning new products that are in the early stages of design. The company will use the same magnetic and mechanical design to expand its family of tables to something it calls “big boss,” as well others called “high top” and “double double.”

The latter will have a survivor mode or doubles games where players will have to team up with a partner to beat the competition. This Pong version departs slightly from original game, the design twist will have a surprise that makes the game more challenging and fun. 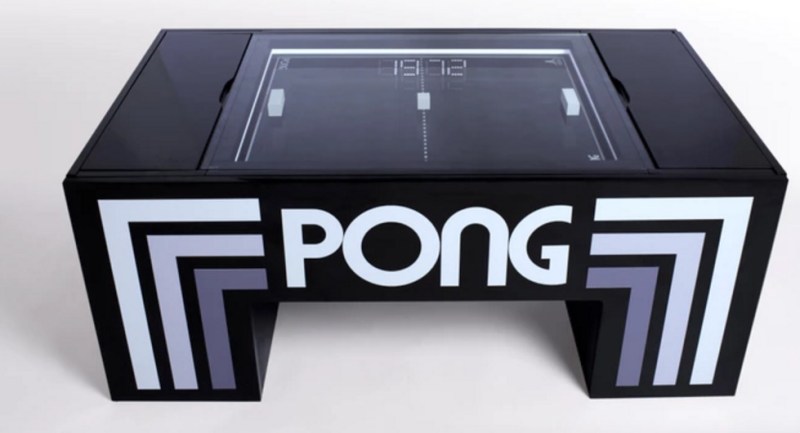 Calinfer was founded in 2014 and it has nine employees. The company started making an air hockey machine. After it completed that, it shifted to work on a coffee table game. That’s how the Pong table evolved. The company had a seed investment from ANII, Uruguay’s National Agency of Innovation and Research, as well as the hardware support accelerator of Sinergia Tech, together with a private investor.

“We used to go to the arcades and play Pong and Ms. Pac-man and Donkey Kong,” Orioli said. “The real reason of this 3D homage to Pong is that, as much as we are fans of the modern stuff, the hyper-realistic games, we like the platform games that you can play with kids. It’s a challenge to find games for the whole family, and that is what we like about the good old days.”

Orioli said he was proud that, so far, much of the support from backers has come from Latin America, including Uruguay.

“That means a lot too, as we owe a lot to our roots,” Orioli said. “We grew up in a place where technology was very scarce. Now there is a huge gaming industry in Uruguay exporting games around the world.”