Kip is a chatbot that simplifies group purchases — it can poll your co-workers about who needs more office supplies, or whether to order dark-roast or light-roast coffee for the kitchen. But Kip has another simplification feature that caught my eye: The chatbot gamifies ecommerce with emojis.

“People can combine emojis together to buy new things. So you can be like, cat + bus = cat bus, or you can do chicken + ramen and it gives you chicken ramen,” said Kip cofounder and chief technical officer Alyx Baldwin. Catbus is a beloved character in Hayao Miyazaki’s animated film, My Neighbor Totoro.

Results can be accurate: An American flag gets you an American flag, lipstick gets you lipstick. Or the results can be fairly random: A plain old smiley face emoji produced a book titled Grim Grinning Ghouls, a Barenaked Ladies album, and a small toy Ultron from the Avengers movie. The scream face emoji gets you the movie Scream. 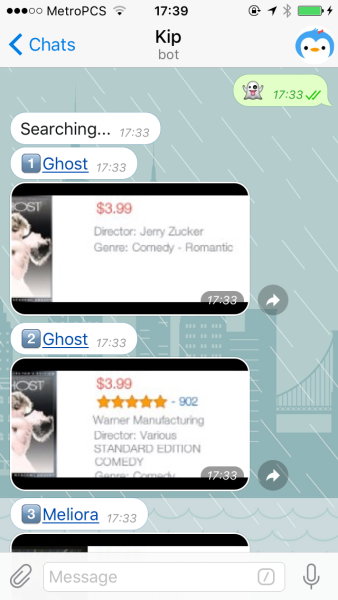 Above: Screenshot of Kip on Telegram.

While Kip isn’t the first startup to embrace emoji-based commerce, it’s an area that’s still in its infancy with enormous potential. For instance, startup Fooji allows you to order food delivery with emojis, and Domino’s started accepting emoji pizza orders last spring. Baldwin said Kip stumbled into its gamification of conversational commerce and the portmanteau-blending of emojis. “It was unintentional,” she said, “but we actually like the fact that it was natural.”

Kip currently helps facilitate group shopping for 500 businesses and 60,000 users. “We want to become the purchase coordinator for all things in the office so that’s why we’re extending to lunch delivery next and we’re trying to work with some grocery partners now to figure out how to do that,” Baldwin said.

The bot – part custom code, part botkit – was created by Baldwin and Rachel Law last fall, and can be used on Slack, Kik, and Telegram. Kip’s bot for Facebook Messenger will be available this summer and geared toward purchases for families and groups of friends. It will also extend beyond shopping with photo sharing and using emojis to discover new things.

Kip was launched as a standalone app, but initially failed to get much traction. “We realized that people were not using the mobile website or the iOS or Android apps we built. What they were doing was engaging only on chat and messaging,” Baldwin said.

That realization led Law and Baldwin to see the full potential of chatbots, emojis and conversational commerce. Kip raised $800,000 in pre-seed funding last year and is currently raising a seed round.