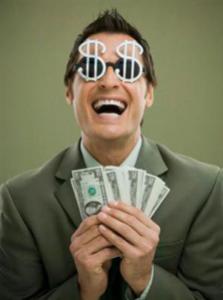 A handful of big-name venture firms have lobbed a sizable chunk of change at Klarna, a Swedish startup that’s taking on Paypal in the mobile and online payments arena.

This is the startup’s third round of venture capital funding; previously, it had raised just $10 million total, including an angel round that weighed in at less than $100,000.

Now, however, it’s apparently playing in the big leagues, with funding coming from previous investor Sequoia Capital and new investor DST, the firm that funded Facebook, Zynga and Twitter in later and larger rounds in the hundreds of millions.

Klarna’s main differentiator is that users are not charged until after delivery of the item they’re purchasing.

“Klarna is unique in the world of online payments because we separate the fun experience of buying from the tedious process of paying,” said Klarna CEO and co-founder Sebastian Siemiatkowski in a release.

“Over 40 percent of transactions in participating online stores are handled by Klarna, rivaling the major credit card companies as the most preferred payment method online.”

Currently, Klarna has just 14,000 participating merchants, most of them in Europe, and around 6 million consumers using the service. It processes around $2.5 billion in payments each year.

For contrast, payments Goliath Paypal operates in 194 markets around the world, has more than 100 million active accounts and supports 24 currencies. Its total payment volume for 2010 was $92 billion.

With its headquarters in Stockholm and satellite offices in Helsinki, Finland and Oslo, Norway, Klarna is hoping this mega-round will help propel it beyond Scandinavia and into a truly international marketplace — and true competition in a somewhat entrenched and heavily regulated space.