Hara, a company that helps businesses and government agencies track their environmental impact, has just launched with $6 million from Kleiner Perkins Caufield & Byers and the support of former vice president Al Gore.

The Menlo Park, Calif., company makes the Hara Environmental and Energy Management System, which gauges how much energy and water a company or organization is using and how much carbon and waste it is producing. The core of the system are the modules that draw information from the meters and equipment that manually recorded this data in the past. Hara already counts the Coca-Cola company and the city of Palo Alto, Calif., among its 12 clients. 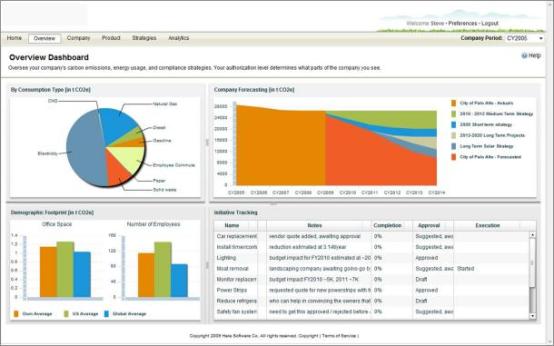 By supporting the company, Kleiner is essentially betting that the “Climate Bill” pending approval in the U.S. House of Representatives will pass, establishing a cap-and-trade emissions system or carbon tax. If this happens, companies will be required to monitor and report their waste and emission figures to the government. On top of that, by identifying wasteful or energy-intensive processes, companies stand to cut their consumption and save money. For example, Coca-Cola, which used the software as part of a pilot program, decided to replace crude oil with natural gas at its facilities in South Africa to lower expenditures. It has also been revamping its lighting systems in the U.S.

Hara is part of a broader trend toward companies using information technology to green their businesses. The company says that Microsoft Excel has been the primary solution for companies that record their consumption and output information. But automating these tasks will free up personnel and organize data for more relevant and meaningful results. Major corporations like Cisco Systems, General Electric and IBM have also been pouring funds into green IT initiatives and startups.

Kleiner has also been active in the space. As a long-time supporter of cap-and-trade legislation, the firm is keeping a close eye on its progress in the House. Al Gore, who is a parter at the firm, has reportedly been making the rounds in Congress, rustling up support for the American Clean Energy and Security Act. But its approval is not a done deal. Many are saying that it will get held up in the House or eventually killed in the Senate by Republicans and moderate Democrats from industrial states. There is also a chance that President Obama will table the issue to throw his weight behind health care reform. While Hara looks promising, its success could hinge on the outcome.