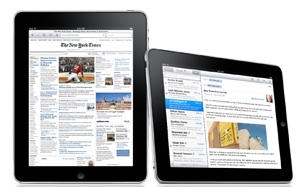 $200 million still won’t buy an iPad that you can show off before Saturday’s launch. At least, that’s one of the messages I took from venture firm Kleiner Perkins Caufield & Byers’ iFund event this morning, where it announced it’s doubling the size of the iFund from $100 to $200 million.

Kleiner Perkins and its portfolio companies were all full of praise for the iPad, with partner John Doerr declaring that it will “rule the world.” There were Apple representatives at the event, and they had nice things to say about the iFund. But there was no iPad.

So Doerr couldn’t demonstrate the “swoosh of liquidity” that he seemed so excited about when describing the interface, and startups like Ngmoco and Shazam couldn’t show us their iPad applications in action.

During the presentations, there were even some jokes about Apple’s incredible secrecy and the nondisclosure agreements (NDAs) the company made its partners sign. After the event, I asked Kleiner’s Bing Gordon confirmed that he’d wanted to have an iPad at the event, but presumably he couldn’t get Apple’s blessing.

VentureBeat has had a brush with Apple’s iPad secrecy too, because a couple of companies launching at DEMO, the conference that we co-produce, wanted to show off their applications on an iPad emulator running on their computers — but even then, Apple said no, without an explanation. One of those startups, mobile presentation company MightyMeeting kept trying, even sending an email to Apple chief executive Steve Jobs (hey, it may have worked for other developers). A week later, Apple changed its mind — again, with no explanation.

On other hand, if you want to see the iPad in action, it looks like famous tech reviewer Walt Mossberg has been playing with one for the past week.