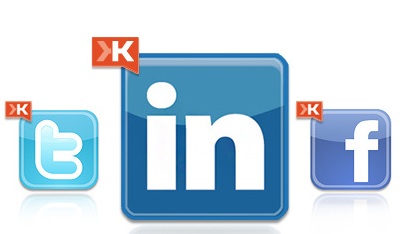 It looks like influence measurement startup Klout has completed the social networking trifecta. The San Francisco company announced Tuesday it now incorporates LinkedIn data into your Klout score, as well as Twitter and Facebook.

As the name suggests, a person’s Klout score measures their influence on social networks on a scale of 0 to 100. (When I was on a panel with founder and chief executive Joe Fernandez earlier this year, he said that Klout built its scale by setting Justin Bieber at 100.) For a certain kind of person (namely, me) this kind of measurement is insanely addictive, and I can’t stop checking my score. More importantly for Klout, it’s a way for marketers and advertisers to find the influencers who are worth reaching out to in their campaigns.

Klout started out by calculating people’s scores based solely on Twitter, and then added Facebook last fall. Now, with LinkedIn, Klout can claim persuasively that it’s providing a comprehensive view of social network influence. LinkedIn may have fewer members than Facebook or Twitter, but it targets a different, more professional audience — I know several people who are active (and influential) on LinkedIn without doing much with their Facebook or Twitter accounts.

On the flip side, I feel like I’m much more influential on Twitter, so I don’t see much incentive for me to connect my Facebook and LinkedIn accounts. But maybe that’s just me.

Klout has been pretty busy recently. It recently redesigned its site to offer more data to consumers, and it also announced a program called Klout Perks, which offers deals to influencers.

Update: Two clarifications via Klout spokespeople: 1) Justin Bieber has a Klout score of 100, but that’s not how Klout created its scale. 2) Klout does not penalize people for connecting social networks that they’re less active on.