If you haven’t used the search engine Kngine yet, check it out next time you’re doing some research online.

It’s taken another step toward solving that huge problem that all search engines face: how to understand the meaning of search phrases you type in. The two guys behind it are impressively scrappy, too. Google or some other large company might want to acquire them before they raise venture capital. 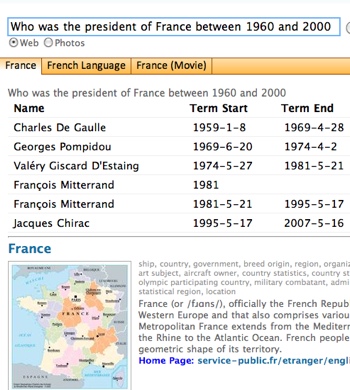 Why is Kngine noteworthy? Try typing into Kngine phrases like United States and China wheat production in last ten years” or  “Who was the president of France between 1960 and 2000.” It returns nicely visual results that directly answer these queries. It does so because it understands the semantics of the phrases you typed in.

Google, by contrast, returns thousands of results for these queries, but you won’t easily find any results responding directly to these queries. Another ambitious engine, WolframAlpha, also stumbles on these queries, despite hiring a small army of experts to create databases for queries.

The same shortcoming goes for Bing, Microsoft’s search engine. Surprisingly, even Powerset, the semantic search engine bought by Microsoft two years ago having raised $12.5 million in venture capital, fails to come close to what Kngine offers in these examples.

Here’s the conundrum for the search industry to date: Google and other search engines rely mostly on understanding keywords, and they’ve had difficulty moving beyond them. Type in my name “Matt Marshall” into Google, for example, and you’ll get results for that name, but you’ll also get lots of results for “Matt,” and for “Marshall,” even if those have nothing to do with “Matt Marshall.” You have to put a quote around “Matt Marshall” if you really want to to look for the two names together. To be clear, Google is getting much smarter over time in the area of semantics. It’s done extensive research into this approach. But the search giant has recognized that so-called natural language search — getting a computer to understand the meaning of phrases — is very hard to do accurately across the board. For now, Google just isn’t set up very well for this sort of approach.

Kngine is just the latest in a long line of companies offering so-called semantic search. A host of companies have tried. The most ambitious was Powerset, but there was also Hakia, and since then several other flavors have also popped up. None have really cracked the nut. And Kngine’s founders say they recognize too that they have huge limits to what they can do.

For now, each of these startups have picked off small pieces of the semantic puzzle. Here’s how Kngine is trying to distinguish itself: Most of the other semantic search engines limit their index to so-called “structured data” so that they don’t get overwhelmed by the chaos caused by greater web’s millions of sites. For example, they draw their results from a limited number of sites such as Wikipedia and Freebase. Kngine, however, has expanded beyond those sources, and seeks to index structures information sources across the greater Web. It has so far indexed “several thousand” sites.

It then mixes a number of semantic approaches to understand your queries, and seeks to provide slick visual results in return. These include interactive charts (if you search “3G phones,” it gives you all phones that support 3G, or if you search “Jim Carrey movies,” you get a list of all Jim Carrey movies) and segmenting results (type in Apple, for example, and it lets you pick whether you mean Apple Inc., or the fruit).

Haytham ElFadeel, 23, and his brother Ashraf, 30, have worked on this for two years on this with no outside funding. Both are engineers who studied in Cairo. Haytham Fadeel says he studied natural language, and that’s the sole basis of the engine’s semantic abilities. The two have built and designed the site entirely themselves, running the site on about $1,000 a month, which is basically the cost of their servers, according to Fadeel. That’s also about how much they make on the ad revenue they’re getting from Google AdSense. They’re essentially break-even. They’re living with support from friends and family in Egypt, which Haytham says is an advantage because costs are so low there.
The traffic is small, but growing. They’ve hit 50,000 page views a month, up from 2,000 page views six months ago. But Haytham says he realizes the company needs to raise some capital to help it expand to the next step.

Next up is their November release, which will focus on improving answers, he says.

The video below shows more of what Kngine can do.