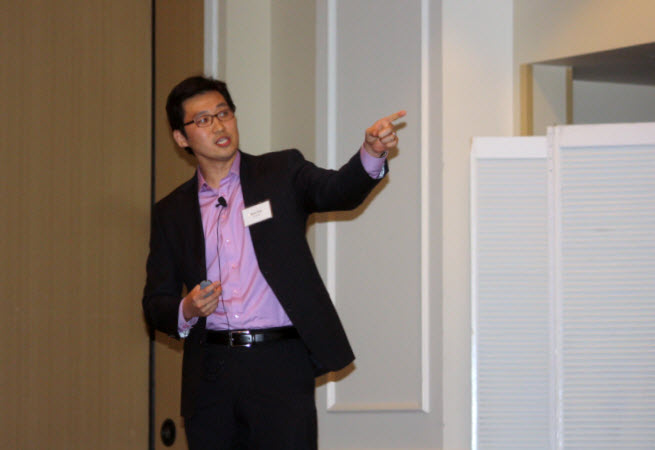 As a student at the Harvard Business School, Bom Kim asked his entrepreneurship professor if he should drop put of school to do a startup. The professor told him no. But Kim dropped out anyway, and it was the best move of his life.

Now he is chief executive and founder of Korean e-commerce site Coupang. Kim (pictured) started Coupang in 2010 as a kind of daily deals e-commerce site, before Groupon hit it big in the U.S. Now the company has seen torrid growth and has a revenue run-rate of $600 million in revenues.

Coupang has expanded beyond deals to physical e-commerce and is now the fifth-most-visited e-commerce site in South Korea. But in a presentation at Altos Ventures’ conference in Half Moon Bay, Calif., Kim said that is a big deal because of the unique characteristics of Korea as a market.

He noted that the country is very dense, with 50 million people living in the habitable areas of Korea that are about the size of Massachusetts. About 75 percent of Koreans live in an urban area with more than 500,000 people in the city. That means that making deliveries to people is cheap and easy. The country also has 95 percent broadband penetration, and its e-commerce market is the sixth-largest in the world, forecast to grow from $24 billion in 2011 to $45 billion in 2015.

Korea is also pretty allergic to outside tech companies. Groupon has spent tens of millions of dollars in the market but is about a fifth the size of Coupang in terms of revenues, Kim said. Google has just a few percent of the search market.

“It’s like the Greece of Asia,” Kim said. “You can’t invade it from the outside.”

Altos Ventures invested in Coupang in August 2010, when the company had about $100,000 in revenues. Now it has 12 million subscribers, 732 employees, and 25,000 merchants selling goods on its marketplace. Besides Altos, investors include Maverick Capital and other seed investors.

“That’s a testament to the growth in the Korean market and how the social commerce space is hot,” Kim said. “We’ve done this by taking the best practices of the East and West.”

About 80 percent of the company’s business is the delivery of physical goods ordered via e-commerce sites. Most of the revenue is generated by people who visit the site every day. So take that, Harvard Business School.