The semiconductor shortage is putting the brakes on global automakers, and it could cost them $100 billion in lost revenues in 2021, according to a report by accounting firm KPMG.

The $100 billion in lost revenue is taken away from the approximately $2.1 trillion automotive market was expected to make in 2021, compared to its revenues of $1.65 trillion in 2020.

Nothing has demonstrated more clearly how much our economy and way of life depend on semiconductors than its current global shortage, KPMG’s principal chip adviser Scott Jones wrote in the report. A series of events — a perfect storm of natural and man-made events, including the COVID-19 pandemic — has created a serious shortage of semiconductor products that is expected to last well into 2022. Technological advancements and the increasing need for chips across industries have only worsened the shortage.

Chipmakers like TSMC and Intel are investing billions of dollars into new factories to boost production, but it takes time to build those factories, and new supplies will come too late to help automakers and other customers suffering shortages in 2021.

Above: KPMG said a perfect storm caused the chip shortage.

It’s kind of a slow-motion train wreck. At the start of the pandemic, most automakers slashed orders of nearly all the components of their vehicles in anticipation of a major drop-off in demand for auto sales. Meanwhile, other semiconductor customers continued or increased purchases of semiconductors to meet the increased demand from work-from-home requirements, driving the need for more PCs, cloud compute capacity, and communications infrastructure.

When demand for vehicles started to accelerate, automakers were stuck behind a large backlog of orders from other larger semiconductor customers who had continued orders throughout the pandemic. Semiconductor companies were already running at near full capacity from the surge in those orders and had no ability to support the resuming automotive orders. Now, a shortage of a relatively inexpensive chip could hold off production of a $50,000 car.

KPMG saw that companies and manufacturers that use semiconductors cut production and trimmed earnings forecasts, with automakers clearly hit the hardest. While automakers account for only about 10% of global semiconductor sales, KPMG estimates that they will suffer about 80% of the $125 billion in lost sales due to the shortage — about $100 billion. Many leading automakers are predicting that production will be affected through the end of the year; semiconductor executives expect a 2022 recovery.

Beyond the more than $100 billion in lost revenue, KPMG estimated automakers will have to spend upward of $10 billion to $15 billion in a one-time cost to rebuild buffer inventory, upgrade the supply chain, and secure more capacity for the future. Additionally, KPMG expects an annualized cost increase on semiconductors to impact automakers by $1 billion to $2 billion annually.

While these costs and expected losses are large, automakers are mitigating the impact by shifting their production and focus to more profitable vehicle platforms. This shift aligns with current pandemic-driven consumer demand and expected emerging demands as many consumers shift to electronics-driven, smarter, and autonomous cars.

What went wrong for automakers? 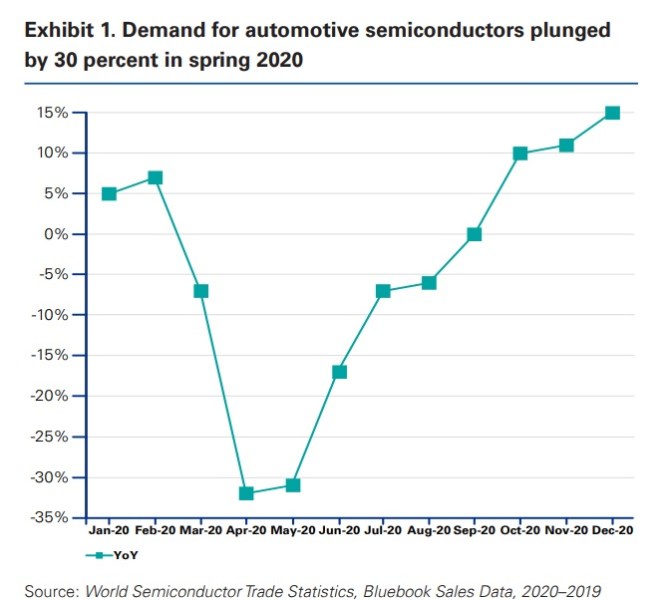 Above: A whipsaw in demand for chips.

Many automakers lack the close relationships with semiconductor suppliers that other customers have developed over time, Jones said. Despite the rising importance of semiconductors in their products, they haven’t adjusted their supply chain to reflect how critical semiconductors have become. They mostly rely on third parties, such as tier-1 suppliers, to deal with chipmakers, and they generally lack visibility into, and understanding of, the supply chain.

There are no quick fixes, but industry and government entities all over the world are taking steps to improve the long-term situation.

How can automakers avoid being caught short next time? 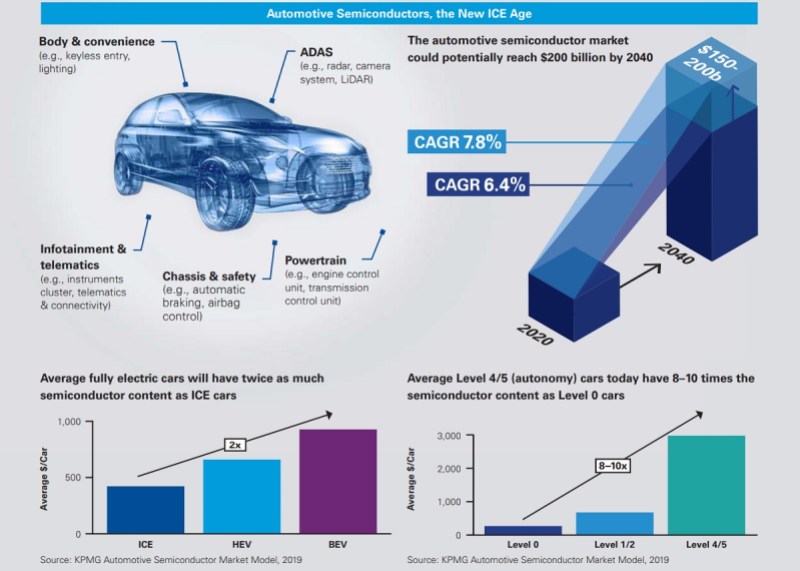 Above: Cars use a lot more electronics than they once did.

The pandemic was a once-in-a-century event — hopefully — but now it will be prudent for car makers to consider what to do next. Jones said they will have to collaborate more closely with semiconductor manufacturers and foundries. Instead of relying on tier-1 suppliers or on indirect supply-chain management, automakers should collaborate directly with semiconductor manufacturers.

They should consider making investments in chipmaking capacity, he said. Automakers can take an active role in ensuring that there is enough capacity for the chips they need by reserving capacity, guaranteeing demand, or making direct investments to increase capacity.

And automakers should overhaul the process for selecting, designing, and sourcing. In the longer term, they can avoid supply problems by reducing reliance on custom parts and instead use standard parts that can be modified or updated via software. Selecting hardware that works with open source software can reduce costs and guarantee access to multiple suppliers.