The U.S. is still a tech innovation hub, but other regions are on the rise, according to KPMG’s annual survey of tech leaders.

Silicon Valley and San Francisco are together viewed as the top hub, but Shanghai ranks as the biggest rival when it comes to innovation. No. 2 behind Shanghai is Tokyo, then London, New York, Beijing, Singapore, Seoul, Bangalore, Tel Aviv, and Berlin, according to 767 global tech leaders interviewed for the accounting firm’s 2018 global technology innovation report.

“Innovation from the U.S. and China technology industries continues to drive economic value, and this year’s survey underscores that point,” said Tim Zanni, technology sector leader at KPMG, in a statement. “Just look at the investments the key platform companies are making in artificial intelligence, internet of things, robotics, and other technologies that have great influence on the way business and consumers engage within our society.”

Technology industry leaders were asked which three cities, in addition to Silicon Valley/San Francisco, will be the leading technology innovation hubs over the next four years. Unlike last year, when the U.S. and China dominated the top 10, this year’s top 10 is more geographically diverse. In the U.S., the top cities named by tech leaders (beyond Silicon Valley) are New York, Boston, and Chicago. The latter two were tied for second. 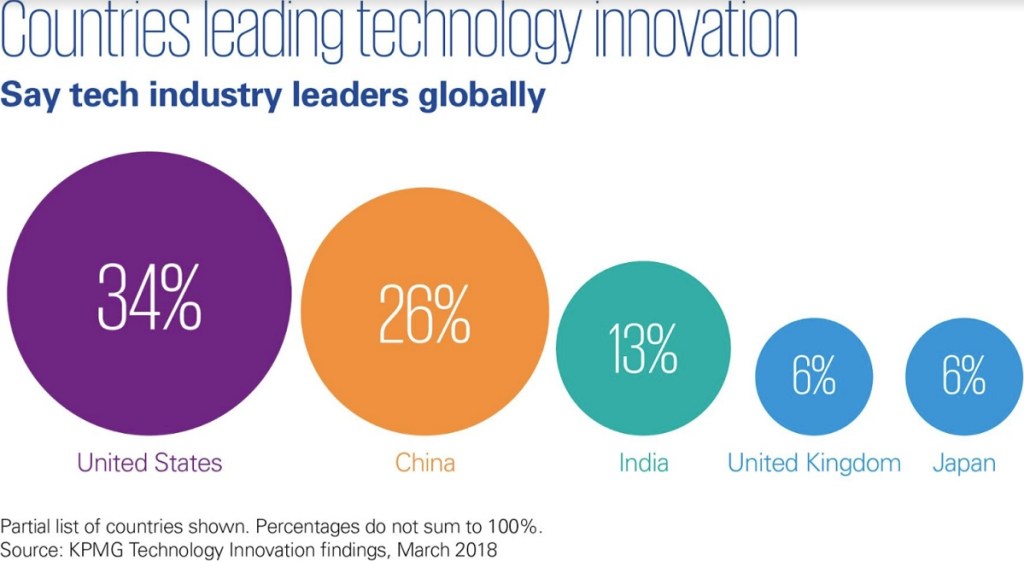 “Innovation has become decentralized globally, with some cities making great progress while others still face macroeconomic and infrastructure challenges,” said Zanni. “Many factors affect a city’s perception as an innovation hub, including favorable government policies and incentives, accelerators, tech parks, corporate investment, state-of-the-art infrastructure and, in all cases, at least a few highly successful and wildly popular success stories.”

Tech leaders in the U.S. and globally said revenue growth is the top metric to measure the success of tech innovation in their organizations, replacing patents, which fell out of the top three. Market share and return on investment were second and third.

Google was again cited as the leading visionary company in driving tech innovation. Apple, Microsoft, and Tesla were second, third, and fourth, respectively. Amazon and Alibaba tied for fifth.