In the more than five years since the French government launched an ambitious entrepreneurship program, the “French Tech” movement has made considerable progress. But a new venture funding report highlights the immense challenges this nation’s startup ecosystem still faces.

Both numbers represent significant leaps since the first full year of the program, when 210 companies raised $1.5 billion. In total, French startups have raised $11.71 billion across 2,511 deals since 2014.

The 8 percent rise is the smallest rate of increase since 2015. And while there has been progress in attracting more homegrown and international venture capital, the report notes that the government-backed Bpifrance bank remains the largest source of venture funding in the country.

While it’s impossible to compare France’s tech ecosystem to that of the U.S. in absolute terms, the latter saw nearly 8,383 venture-backed companies raise more than $130 billion in financing last year, up from $83 billion in 2017. This massive leap comes as China is also seeing dramatic acceleration of its startup ecosystem. In contrast, France (and Europe) are slowing a bit, as their biggest competitors press down on the gas pedal.

Even compared to the rest of Europe, France’s progress is steady, but not spectacular. The U.K. remains the undisputed leader in the region, when it comes to fundraising. And Germany held a solid number two spot for 2018, despite France’s efforts to close the gap.

Why is that? The U.K. and Germany are getting more later-stage funding. According to C.B. Insights, France’s average deal size was $3.7 million, far below the U.K.’s $11 million and Germany’s $7.2 million.

France has created a hive of activity among early-stage entrepreneurs that has drawn enormous buzz and started to chip away at the image of a country loath to embrace the future. But companies that survive the early stages still tend to drift to other shores in search of the later-stage money that remains scarce in France.

Last year, French officials under President Emmanuel Macron’s government announced a reboot of La French Tech, with a focus on helping companies scale up. Many of those plans are still being put in place, so it’s too soon to expect much of an impact. But the need is urgent. C.B. Insights says that through 2018, even as early-stage deals fell overall, later-stage deals were only just barely ticking up. 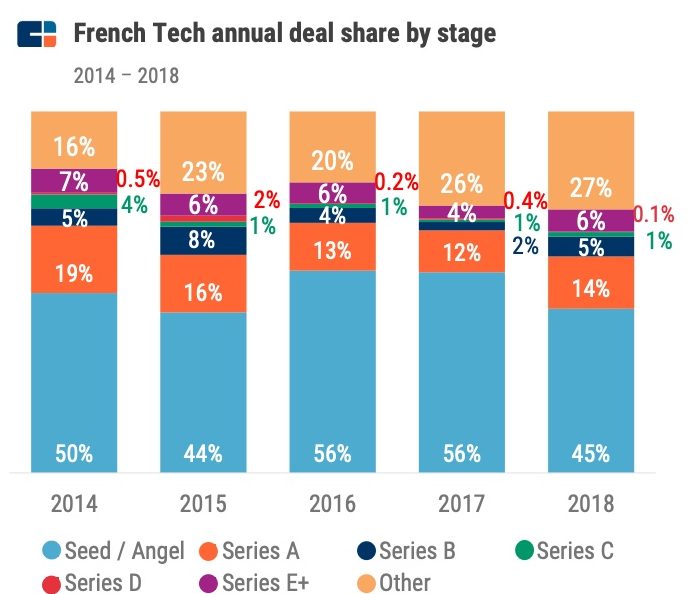 Getting over that next hump will be critical if France hopes to realize its dreams of becoming a startup nation. As part of that, the country needs to cultivate a more dynamic economy that can create jobs and convince its brightest and most well-educated citizens that they have a future at home.

It’s a difficult task, for sure, but not impossible. In early January, HR tech company Talentsoft raised $50 million in a round that included money from Francisco Partners, Goldman Sachs, and, yes, Bpifrance.

Founded in 2007, Talentsoft, which is based just outside of Paris, has 600 employees in 130 countries. That series D raise brought its total to more than $100 million. And it’s proof that a French company can stay and grow in France and still attract bigger rounds.

Now such stories need to stop being the exception and become the rule.