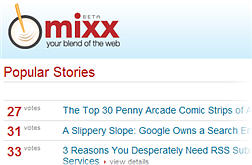 The Los Angeles Times has partnered with Mixx, a social news website, to give readers more input in the news they read.

The publication has also said it will start using technology from Aggregrate Knowledge, a Silicon Valley company, to deliver user-driven content suggestions to its web site, starting with its travel section. It lets users see what other users like them have also viewed.

These are the latest moves by a large newspaper to try to include more social or open features into its Web site. Strategies vary widely. Recently, for example, the New York Times started linking to other sites from its Web site, for example — though that effort still lets editors control what stories are pointing to.

The LA Times calls itself the largest metro newspaper in the country, with 2.2 million daily readers. The company said it also invested in Mixx, though the amount was undisclosed (see statement). The company said the stake was small.

Mixx launched in October (see coverage), partially as a way give newspapers and other publishers their own version of the popular news ranking site, Digg. But rather than letting hundreds of thousands of young techies dictate what is popular — as Digg does — Mixx gives control to the individual user. It shows them stories based on where they live and what their self-defined interests are. Its recommendation engine is standard, offering up content, including news stories, video and photos, relating to your previously expressed interests and location.

The company sees itself as being more than a competitor to Digg. It is also a competitor to personalized start pages such as My Yahoo, iGoogle, PageFlakes and Netvibe, chief executive Chris McGill tells us. It offers a one stop place for relevant news and other information, like those sites do. It also offers group and profile features, the components of a social network.

Mixx has signed deals with USA Today, Reuters.com, The Weather Channel, Kaboose and uclick Comics. It is owned by Recommended Reading, of McLean, Virginia. It had previously raised $1.5 million round of funding, in a round led by Intersouth Partners.

The service will be integrated into LATimes’ story pages. 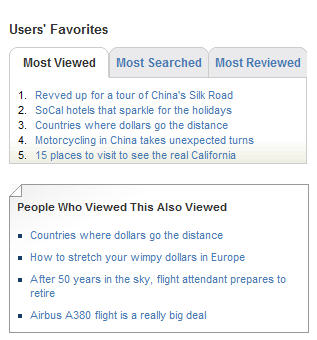 In addition, Times’ content will be “optimized” for searches from within the Mixx site, suggesting results will be biased toward returning LATimes stories.

McGill served as the general manager of Yahoo News from 2000 to 2004 and the vice president of strategy at USA TODAY from 2005 until earlier this year.

The company is getting several hundred thousand unique visitors a month, McGill tells us.

Aggregate Knowledge’s technology, meanwhile, will be rolled out across the LATimes.com site over the coming months. Image here is an example of what Aggregate Knowledge provides for articles on the site. See this page, for example.