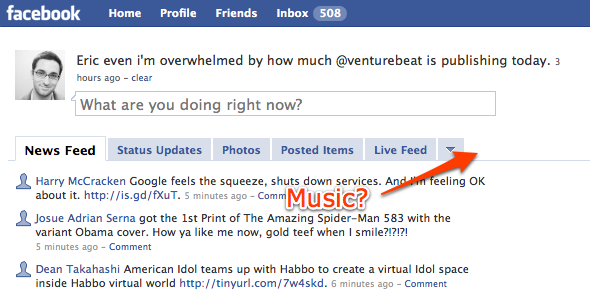 Two online music companies, Lala and Qloud, are the leading contenders for a partnership with Facebook on its prospective streaming music initiative, I’m hearing. They’re not the most prominent companies Facebook has talked to about a potential deal, but from my understanding, that’s the point. Facebook will undoubtedly call the shots in any partnership. Neither company is especially established, and both could have more to gain from a Facebook partnership than continuing solo.

However, it’s not clear how serious the entire initiative is at this point. Facebook has also been considering scrapping the music idea or even building its own music service. It’s also spoken with a number of other music companies, including Last.fm, imeem, Rhapsody, iLike, and others about a possible deal — and I hear it is still talking with some of them. The problem is that those other companies are established. Among other issues, they’re not in positions to change their services based on what Facebook might want to offer.

I’ve asked Facebook for comment — although it’s about midnight right now and based on previous responses about their music initiative, I don’t expect them to say much now. I’ve also emailed Lala and Qloud. For what it’s worth, Lala gave me a non-denial denial when I wrote about them being in the running for a Facebook partnership, several weeks ago.

What might a Facebook music service look like? Sources have previously told me that it’d be similar to some of the other music services already out there, except more directly integrated into Facebook. You might be able to create and share playlists of full songs with your Facebook friends, for example. Songs or playlists could then appear on your profile feed and in your friends’ news feeds. There might be options to purchase tracks, find concert tickets, and other related, money-making features.

It sounds pretty cool. It would certainly be a great fit with Facebook’s overall vision of helping people share information with those they care about. I’ve also heard there’s quite a bit of internal turmoil about the project within Facebook. One issue is that iLike has already developed many music-sharing features — although not the crucial feature of letting any Facebook user stream a limitless number of full songs. That feature is restricted for iLike — and for most other music services — due to licensing limitations imposed by music record labels.

Facebook has previously promised to compete with third parties such as iLike on a “level playing field,” but it has also given its own applications special privileges. As I covered in a very long-winded piece last month, Facebook has the tough choice of either standing by old promises to developers on the platform or, at least in some cases, changing its stance to try to better fulfill its broader vision.

Music licensing, in any case, isn’t just about iLike. If Facebook goes ahead with a music service of any sort, it would also have to confront licensing issues, but it could possibly have the clout to work out a better deal. Or maybe not.

As one of my sources for this story put it:

So if iMeem paid [the labels] tens of millions, and Myspace paid $120 million, the [labels] have been licking their chops over Facebook for a long time and cannot wait for the kill. The labels are also equally eager to perpetuate the perception that Facebook is very close to doing a deal. There are individuals at these labels whose job for the last 12 to18 months has simply been to hound Facebook. Meanwhile, the whole point of Facebook’s strategy in the last few months was, “maybe we can get music for free, by finding some hapless middleman to pay the pound of flesh.”

While some of the more established companies in contention may have been willing to put up $100 million or more to deal with the labels before the economy tanked last September, they’re no longer in a position to. They don’t have access to that kind of money for such a plan. Meanwhile, record labels aren’t seeing lots of revenue from other streaming music services — they want the upfront cash. If a Facebook music initiative happens, they’ll likely try to get money from Facebook, too. Finally, Facebook can’t really afford to offer anything more restrictive than rival MySpace’s free, streaming music service

If the apparent front-runners are services like Lala — whose business model is to charge consumers for music streaming — it will be interesting to see whether Facebook can actually succeed in getting the one crucial feature it set out to secure: unlimited free streaming.