Landfall is a new Oculus Touch-based top-down shooter where you get to view an entire sci-fi battlefield and maneuver your soldier through it.

It is part of a wave of good-looking titles coming for the Oculus Rift virtual reality headset that are compatible with the Oculus Touch controllers. In Landfall, you play a soldier in an army that is dedicated to reclaiming your homeland in a multiplayer VR experience. Force Field is making the title.

After oceans flooded the Earth, the remains of mankind recovered and united. Then, conflict came again, and two factions are fighting for control of new resources found deep in the Earth’s crust. 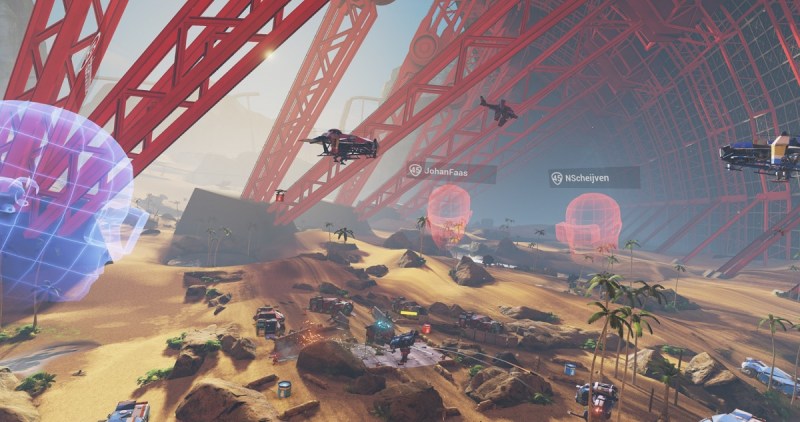 Above: Landfall is a sci-fi VR game where humanity is at war.

When I put on the headset, I saw small soldiers on a big tabletop-like playing board. I went through the tutorial, where I learned to control the soldier’s direction with a joystick (that wasn’t so easy) and then fired in a certain direction by pulling the trigger. I could pick up grenades by running over them and then toss them with a combination of aiming and throwing. Once you earn enough points, you can summon a bipedal mech with heavy armor and weaponry. The mechs are quite fun, but it was a little hard to tell when they were ready to come down from space.

All the while, I saw lots of minions on the battlefield, all trying to take various rally points on the map. I teamed with another human player in a battle against two other people. We had to win two out of three rounds by taking control of different maps. We had to work together to destroy the enemy minions, outwit the human players, and capture victory points. 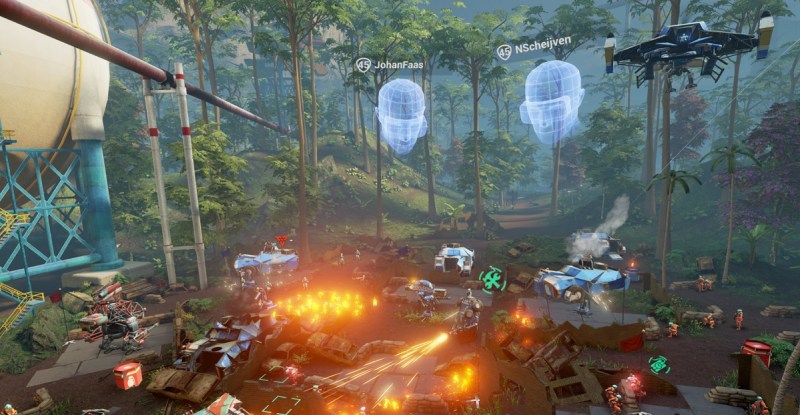 Above: You can see your opponents’ avatar faces in Landfall.

You can see the enemies and what they are doing, so you have to spot opportunities by looking around the map. I started out on the red team, which defended three zones. At first, we did well in combat against the blue team, which was on offense. Then, we switched to offense in the second round and won that one. But we wound up losing the next few games as our rivals got the hang of it.

“Before this game, we were a traditional game studio, and now we are making AR and VR games,” said Martin De Ronde, chief creative officer and cofounder at Amsterdam-based Force Field. “Before this, we made Halo: Spartan Strike top-down shooter games for mobile devices. This game started after we decided to take top-down shooters into VR.”

Ronde said it has been a challenge to get the game to run at 90 frames a second in VR. It has long draw distances, as you can see the whole battlefield. And it features lots of explosions and many moving soldiers.

The game will also have a single-player campaign, which I didn’t play, as well as cooperative missions. It will include eight major missions. The team has been developing the game since September 2015.

Unfortunately, the art wasn’t as sharp to me as you see here in the images and trailers. The imagery was actually blurrier when I viewed it. Hopefully, they’ll fix this before launch, as the game looks like it could be very beautiful, with all of the colorful explosions. The team has plenty of time to fix it, as the game isn’t coming until the spring of 2017.