Biofuel companies are gaining momentum — with the market fixing its eyes on the conversion of corn and other agricultural stocks into ethanol. But another area of the business seems to be heating up: turning trash into transportation fuel. Last week, Fulcrum BioEnergy demonstrated its technology squeezing ethanol from municipal garbage. Today, New Zealand-based LanzaTech says it can do the same from waste gases released by steel factories.

Founded in 2005, the company has proved that its technology works, successfully operating such a plant for 2,500 hours, albeit on a pilot scale (1,000 liters of fuel at a time). It uses microbes to ferment residual gases — particularly carbon monoxide — removing particulates, nitrogen and oxygen to create ethanol. LanzaTech is the first company to turn to steel mills for this purpose, providing a way to not only trap damaging emissions, but to turn them into something useful. The idea won the company a $3.5 million first round of venture funding in 2007 from a flock of investors led by Vinod Khosla — a strong vote of confidence.

LanzaTech’s ability to transform carbon monoxide sets it apart from a growing field of biofuel competitors. In addition to Fulcrum, companies like Coskata and Rentech are also developing microbial and catalytic methods to produce ethanol from waste. And others like Sequesco and GreenFuel Technologies are focused on trapping and using industrial gases to do the same. But most of these technologies are based on carbon dioxide emissions. The ability to use carbon monoxide makes LanzaTech’s process ideal for metal and rubber processing plants that have been harming their surrounding environments for decades (on average, steel mills emit a half ton of carbon monoxide for every ton of steel produced, just to give you an idea).

While it might be costly to retrofit existing plants with the company’s fermentation equipment, the ethanol it produces would be incredibly cheap. Carbon monoxide is plentiful and inexpensive. And the resulting fuel could be used to replace up to 90 percent of the gasoline needed to run a car, the company says — potentially dropping the price of fuel for average drivers.

As promising at this sounds, LanzaTech needs to prove that it can scale commercially in order to be successful. Other companies, like Amyris Biotechnologies and LS9 have demonstrated that growing microbial operations for biofuel quickly and cheaply is possible. It’s just a matter of breeding the most efficient, hardiest bacteria possible. For LanzaTech — which plans to open a larger demonstration plant by 2013 — this is an ongoing process. It already brought in $9.3 million from New Zealand’s government last summer to set up its current pilot project. This sum is expected to keep operations running for the next four years. 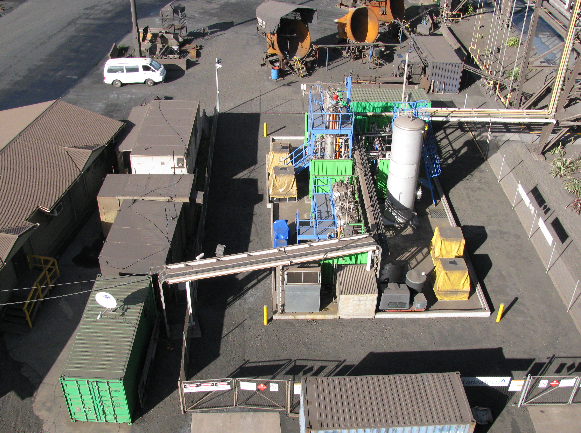