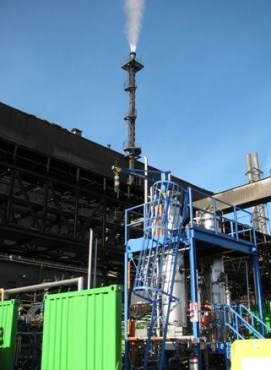 Five years after its founding, LanzaTech, a company that transforms waste gases released by steel mills into fuel ethanol, is finally commercializing its technology through a new partnership with China’s major iron and steel maker Baosteel.

There’s a pattern emerging in the biofuel industry. Startups generate good ideas for producing car and jet fuels from a variety of feedstocks, ranging from corn to carbon emissions, from algae to municipal waste. They take in a moderate amount of funding to develop their products, but inevitably hit a glass ceiling when it comes time to scale commercially. To jump this hurdle, they usually require help from a major corporate interest, like Chevron or Shell — or, in the case of LanzaTech, Baosteel.

The company, based in New Zealand, has hit each one of these milestones. Spotting the opportunity, it launched a successful pilot plant at a steel mill in Auckland in 2008 (pictured above). Its process traps the gases emitted by steel manufacturing — particularly carbon monoxide — and then ferments them with specially engineered microbes to produce ethanol. The pilot plant ran for 2,500 hours, churning out 1,000 liters of fuel at a time, while simultaneously diverting harmful emissions that would have otherwise been released into the atmosphere.

China, now hyperconscious of air pollution following the criticism it drew during the smog-choked Olympics hosted in Beijing, has taken a special interest in technologies that reduce emissions from industrial plants. (Despite the shuttering of much of Beijing’s industrial sector in the run-up to the Olympics, the Chinese capital still remained heavily polluted, drawing a sharp focus on the need to manage the environmental impact of economic growth.)

On top of that, LanzaTech could produce ethanol that is incredibly cheap. Carbon monoxide is plentiful and inexpensive, and the resulting fuel could replace 90 percent of the gasoline needed to run a car, thereby dropping  the price of gassing up for average drivers.

Its this potential that caught the eye of Khosla Ventures, which led the company’s first round of funding, $3.5 million, in 2007. The prestigious Silicon Valley venture-capital firm has distinguished itself by backing cleantech companies that operate within existing infrastructure (traditional gas tanks, for example). It’s invested in biofuel startups LS9 and Coskata for the same reason.

LanzaTech’s investors may still have to wait for a while yet, however, as it plans first to build a demonstration-scale plant at one of Baosteel’s mills before fully commercializing its ethanol. The deal with Baosteel also brings in a third party, the Chinese Academy of Sciences, which aims to study and improve LanzaTech’s process, and apply it to similar products, including fuels derived from biomass and other organic waste.

The last time VentureBeat reported on the company, its business was on track, but it was unclear how it would achieve the necessary scale. It said it hoped to bring a demonstration plant online by 2013. Now the Baosteel deal has helped it beat this target by three years, bringing its ethanol that much closer to market, and giving it a leg up over competitors.

The relationship between LanzaTech was encouraged considerably by the 2008 free trade agreement between New Zealand and China.