Here’s a complaint that might sound familiar to many Americans these days. With France scheduled to hold national elections in 2017, a large number of voters are less than enthusiastic about their choices for the country’s next president.

France is currently led by the Socialist Party, but President François Hollande has nearly invisible approval ratings. On the far right, there is Le Pen, an anti-immigrant party that makes Donald Trump look like a harmless kitty cat. And on the less-far right is the Republican Party, which is still trying to figure out who is going to lead it and what it may or may not stand for.

Thibauld Favre, a young French entrepreneur living in New York City, has stepped into this cauldron of despair with a daring plan: He has launched an effort called LaPrimaire.org to crowdsource the next president of France.

“People in France are very distrustful of political parties right now,” Favre said. “So I started wondering, ‘How can we get them more involved now in the elections?’ ”

The effort doesn’t have a policy agenda, and basically anyone in France can nominate anyone else in France. Naturally, the trick here is to prevent random people from gaming the process and turning it into pure nonsense.

To do that, Favre built a Telegram chatbot called “Victoire de La Primaire.” The bot can be used on the smartphone application or the Telegram web client. The process uses a person’s telephone number and a series of questions to confirm their identity and their eligibility to vote. 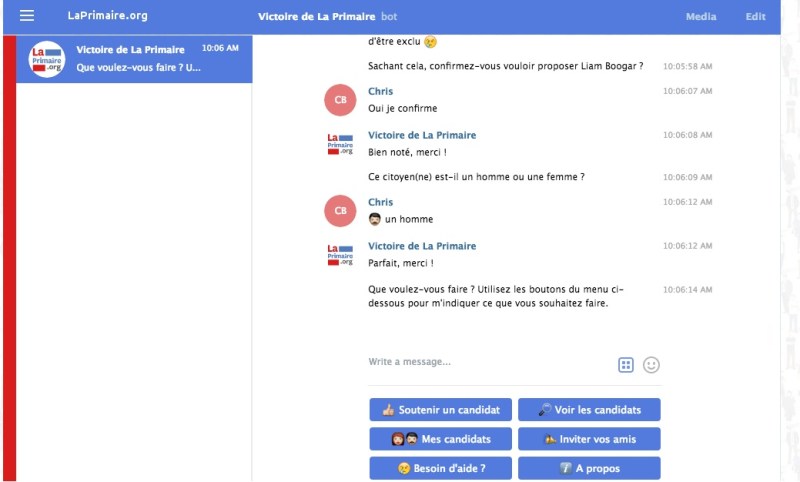 Once a person has been confirmed, they use the chatbot to make a nomination, view the list of candidates already nominated, or express their support for a nominee.

When nominating someone, the bot scours the web to find information about the person and start building a profile on them. So far, there have been 203 people nominated.

The cutoff for nominations is July 14 (Bastille Day!), and the goal is to have 100,000 citizens registered on the site and participating by then. The group is just over halfway to that goal.

From there, things naturally get a bit complicated. After July 14, a candidate must have attracted at least 500 supporters on the site to continue to the next round.

LaPrimaire will then begin to organize debates, meetings, and other events to allow candidates to present their agenda and introduce themselves around the country.

By October, there will be another round of voting to cull the list to the top 5 candidates, who will then be invited to participate in another round of debates and campaign events. A final vote will be held in December to choose the official “Citizen Candidate.”

Then Favre will face his next great test: Getting that candidate on the ballot. In France, ballot access is determined by the mayors of cities. A candidate needs to attract the support of 500 mayors to be placed on the ballot, Favre explained.

Sound impossible? In France, there are 36,000 cities or towns, some with just a handful of residents. Favre wants to recruit participants from the nomination process to lobby small town mayors to break with their official party and agree to support the placement of the Citizen Candidate on the ballot.

“Basically, we need to go after the long tail of French politics,” he said.

Along the way, LaPrimaire is asking for donations to support the work involved in keeping the process going, Favre said. While the effort certainly remains a longshot, the response since launching just a few weeks ago with little publicity or fanfare has been strong.