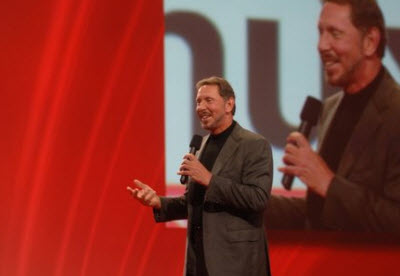 “I’m speechless,” he wrote in an email to the Wall Street Journal. “HP had several good internal candidates … but instead they pick a guy who was recently fired because he did such a bad job of running SAP.”

An HP spokesperson said in response to the WSJ that Ellison’s comments don’t “deserve the dignity of a response.”

Ellison has a biased view, of course. He hired former HP CEO Mark Hurd as co-president of Oracle shortly after HP forced Hurd to resign in the wake of an ethics scandal. Ellison had belittled that move for being as stupid as Apple’s firing of founder Steve Jobs many years ago.

By hiring Apotheker, HP seems to be positioning itself to make gains in software in direct competition against Oracle, which is trying to attack HP’s hardware business.

“None of the HP board members own much HP stock so they have little to lose,” he wrote. “But the HP employees, customers, partners and shareholders will suffer. The HP board needs to resign en masse … right away.  The madness must stop.”

HP sued Oracle after it hired Hurd, saying he would likely spill trade secrets to Oracle. The two companies settled the suit and said they were valuable partners. But apparently the settlement didn’t require Ellison to shut up. 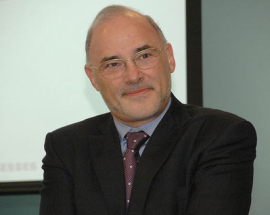 Meanwhile, HP held a call this morning to introduce Apotheker (right) to Wall Street and the press.

“For me the decision to accept was an easy one. I don’t think there’s another company in tech that can match HP’s opportunity in the marketplace,” Apotheker said. “I believe that HP should be more valuable than the sum of its parts,” Apotheker said this morning. “Software is sort of the glue to make that happen.”

HP board member said that HP considered six candidates for the CEO job. The board considered internal and external candidates but offered the job only to Apotheker. It also brought aboard Ray Lane, managing partner at Kleiner Perkins and former president of Oracle, as non-executive chairman of HP. It will be surprising if HP manages to hang on to its internal candidates — reportedly Ann Livermore, Vyomesh Joshi, and Todd Bradley — who have been passed over a few times for the top job now.

HP’s stock was down 3 percent today to $40.77 a share, suggesting that HP shareholders are also puzzled by the choice. Of course, everyone scratched their heads when HP appointed Mark Hurd, former head of NCR, as its CEO five years ago. He managed to grow HP from $80 billion in revenue to $115 billion in revenue, enabled it to surpass IBM as the top tech company, and he doubled its number of employees.