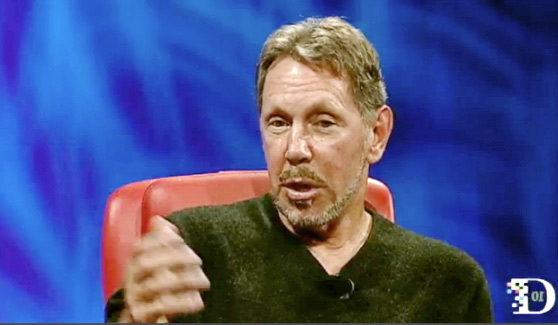 Cloud-hating Oracle chief executive Larry Ellison has had an about-face: He actually likes the cloud. In fact, he likes it so much that Oracle will be launching a full suite of cloud-based products on June 6.

Ellison has been a self-proclaimed “cloud-hater,” mostly because up until October, 2011 Oracle’s primary business was based on powerful hardware and software solutions. At the conference, he warmed up to the term during an interview with All Things D’s Kara Swisher.

“They don’t call it the Internet any more. They call it cloud computing,” Ellison said, throwing out one of his trademark sweeping generalizations.

“I’m no longer resisting the name ‘cloud,'” he said by way of explanation. In fact, he says, he was responsible for the genesis of some of today’s most successful cloud companies, including NetSuite (“NetSuite was my idea”) and Salesforce.com (“six months later Marc Benioff copied it”). What bugged him before was the notion that the cloud was something radically new, rather than an evolution of the Internet.

Now, however, he thinks differently. “I like the word ‘cloud’ because it’s a charismatic brand,” Ellison said.

Oracle’s June 6 launch of “Oracle Cloud” will include a platform-as-a-service (PaaS) offering as well as the full suite of Oracle applications, all delivered as software-as-a-service (SaaS).

“For the first time you’re going to have a complete ERP and complete CRM suite on the cloud,” Ellison said.

He had sharp words for cloud-based competitor Workday, which he called “frail.”

Oracle has also been doubling down on the hardware business, thanks to its $5.5 billion acquisition of Sun, which Ellison said has already paid for itself.

“Sales are going down in hardware, but the unprofitable part is going away. Our margins are the highest of anyone in the server business. The sales are down 20 percent, but the profits are up,” Ellison said.

One of the reasons he likes the hardware business, he said, is that it’s “90 percent software.”

And, he added, Oracle wants to do more hardware manufacturing in the U.S., starting with its Hillsboro, Oreg. location.

“We are bringing a lot of manufacturing jobs back to the United States,” Ellison said. But, he added, it’s a challenge, because of a critical shortage of manufacturing engineers in America. One way to address that, Ellison said, is through immigration (an argument made earlier in the day by LinkedIn CEO Jeff Weiner, incidentally).

“We have got to have a more balanced immigration policy. Immigration is a good thing,” Ellison said.

On his company’s recent court battle with Google over Java, Ellison seemed pleased, despite a decision that went largely against Oracle. In fact, Ellison said, the court found in favor of Oracle on copyright infringement.

“We won on infringement. They were infringing our copyrights,” Ellison said. But because the litigation is still ongoing (which presumably means Oracle will be appealing the decisions), he didn’t comment further.