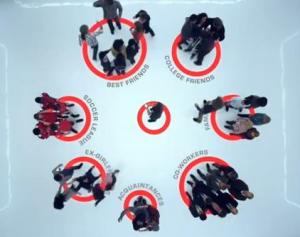 Google+ is a social network that is being built backwards. Hundreds of millions of people rely on Google, but not its social network. That makes things awkward in a lot of ways, and certainly Google’s efforts to find a foothold in the social space have seemed, until recently, feeble or forced.

But while my colleague Rocky Agrawal is right that companies often try to woo journalists and their audience with misleading numbers, I think Larry Page’s statement that 60% of Google+ users engage with Google products once a day is in fact quite meaningful for the health of the search giant’s social efforts.

As I’ve argued before, when discussing AOL’s disasterous purchase of Bebo, email charts a powerful social graph all on its own. My Gmail understands who my close family is, as opposed to my co-workers or my wiffle ball league. When I begin to compose a letter to one person in these group, Gmail startlingly accurate at recommending other, socially significant connections I might include. Like hundreds of millions of other Gmail users, I also rely on Google for instant messaging, chatting with friends, co-workers and sources.

Mark Zuckerberg has said time and again that photos were Facebook’s killer app. Well Picasa has a ton of my photos, and can even auto-tag a lot of my friends and family through facial recognition. Search is also a powerful tool for Google to understand who I am. That’s why advertisers for mixed martial arts gear pay to reach me for searches about my favorite fighters. The music and movies I searched for through Google in the last few months are probably a far more up to date picture of my taste than what I listed on my Facebook profile, which I haven’t changed since a few years back.

The point is that engagement with many of Google’s services, while logged into Google+, is as meaningful for the health of the social network, in terms of robust personal data, as actually going to Google+ and posting a message or comment.

As the venture capitalist Fred Wilson argued, email is actually social media’s secret weapon. I would argue the same is true for the contacts in your phone. That particularly intimate social graph, the people you call and text on a regular basis, is now being woven into Google+ through Android phones, like the Galaxy Nexus in the video below.

That’s why I  think critics miss the point when accusing Larry Page of dishonesty and fluffing the growth numbers. If Google+ was a small scale project, that might be true. But it seems like Google is committed to integrating it into their core business, going so far as to sully their prized page rank with social results. And so its fair to consider how often Google+ users rely on other Google services like email, photos, calendar and chat, which represent a data rich portrait of their social lives.