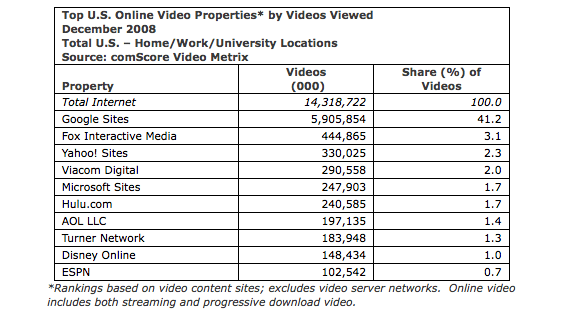 Whether it was bad weather, mass layoffs, great new content, or the general growth of the web, online video views surged 13 percent in December, according to a new report by comScore. As usual, YouTube led the pack with 5.9 billion video views last month, or 41 percent of the overall market — up from 5.1 billion views in November and 49 percent of all growth in this market segment last month. Fox Interactive Media (mostly MySpace), was once again the distant second, with slightly less than half a billion views, up slightly from November.

As has been the trend in recent months, YouTube users watch many more videos than their peers on other sites. YouTube’s 100 million viewers in December watched an average of 59 videos per month, while FIM’s 57 million mostly-MySpace video viewers watched nearly eight videos apiece. In other words, people seem to go to YouTube specifically to watch a lot of videos while they might be using a site like MySpace for other things, like listening to music or messaging with friends, and only incidentally watch videos. Within FIM, MySpace accounted for 48.7 million viewers, who watched 367 million videos, or 7.6 videos per viewer.

Hulu, which otherwise trailed with 25 million viewers who watched 241 million videos in December, kept people watching its videos for 10.1 minutes on average — far longer than the video site average of 3.2 minutes. So even though it gets less traffic than its rivals, it has lots of time to run ads in front of its audience.