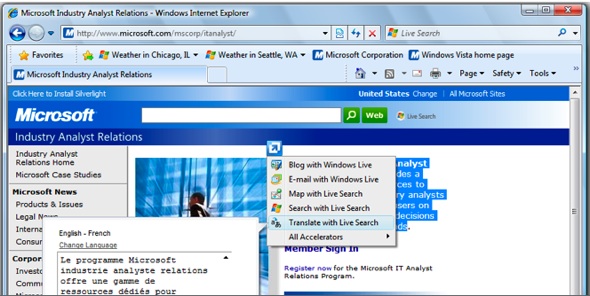 Microsoft’s Internet Explorer 8, the latest version of the most commonly used web browser in the world, has left beta testing and is now available as “Release Candidate 1.” This isn’t the final release version per se, but it’s close enough that reviewers and users can really start kicking the tires and forming early judgments. I’d participate in that process too, except that IE8 isn’t available for Macs.

At the very least, I can say that the new browser includes some compelling concepts that could help Microsoft hold on to its insanely high market share, and perhaps even reverse its decline against competitors like Mozilla’s Firefox and Apple’s Safari. At the top of the list are Accelerators, which let you access various web services without leaving the page you’re on. For example, you can map an address via Microsoft Live Maps, or you can “tweet” about interesting things you find online via the Twitter Accelerator. A lot of companies are exploring this idea with similar products, including Vysr and Mozilla’s Ubiquity.

IE8 also includes a related concept called “Web Slices,” which lets you monitor certain web services even after you’ve left the page. So no matter where you are on the web, you can receive updates whenever you get a new email, for example.

Both Accelerators and Web Slices were already available in the beta versions of IE8, but the release candidate includes some completely new features too. One of those is an anti-phishing tool that protects against “cross-site scripting attacks.” Those are attacks where you get directed to a real website (most savvy users know to check links that they receive in suspicious emails, to make sure they’re not getting sent to scam sites), but use JavaScript to steal any information you deliver to that site. IE8’s cross-site scripting defense now disables any of that suspicious JavaScript.

All in all, this sounds like a cool package — more than just a facelift from IE7, even if nothing super-innovative when compared to other browsers. Now, if it only I could actually use it on my MacBook . . .