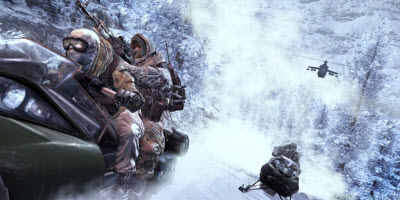 Activision got the bargain of the century in 2002 when it paid a total of $5 million to buy Infinity Ward, a cash-strapped game studio. Infinity Ward’s Call of Duty series has since gone on to generate more than $3 billion in revenues for Activision.

Those details, included in a lawsuit filed by two Infinity Ward co-founders yesterday, get at the root of the dispute over who gets credit and compensation ($36 million worth) for the creation of what has become the world’s most successful game franchise.

Jason West and Vince Zampella were fired by Activision Monday for alleged insubordination and breach of contract. But the two allege that Activision trumped up the charges on false pretenses and then fired them before they were to due to receive large royalty checks for Call of Duty: Modern Warfare 2, which sold more than 15 million copies since November. Their prior game, Call of Duty 4: Modern Warfare, sold 13 million copies.

Buying Infinity Ward for that paltry price was a great and shrewd deal for Activision at the time. But the question is, did the company then share enough of the revenue with its key employees. Clearly, from the point of view of West and Zampella, Activision, now Activision Blizzard, was stingy.

It’s worth noting that Bobby Kotick, chief executive of Activision Blizzard, said in a speech that his company did not like paying high prices to buy game companies. Rather, it acquired studios with potential, gave them resources, left them alone, and allowed them to prosper. In the case of Infinity Ward, that clearly happened. Under Activision Blizzard, the studio had the marketing muscle to turn its great games into bigger hits. But how much value did Activision Blizzard really create, and how much was created by Infinity Ward?

Kotick said you have to be the “village idiot” to believe that games are made by one person. He said it was good for developers to check their egos at the door and realize that it “takes a village” to make a game. Did Activision treat its star studio, and its leaders, right?

Both Zampella and West were signed on for three-year contracts after the acquisition. After the successful launch of Call of Duty 2 in 2005, the contracts were extended for two more years through the end of October, 2008. With the successful launch of Call of Duty 4: Modern Warfare in 2007, Activision approached the two men to extend their contracts again, even though they weren’t up for another year.

West and Zampella felt like Activision had begun interfering with the studio and were not eager to begin work at a break-neck pace on Call of Duty: Modern Warfare 2. They felt that Activision was pushing too hard for shorter deadlines on the games, compromising quality and interfering with creative freedom. They also said that “Infinity Ward employees were not being given a fair share.” But Activision negotiated and gave them inducements, and they signed a new memorandum of understanding in March, 2008.

In that, they were guaranteed creative freedom and control of the studio. They got control of what games could be published under the Modern Warfare brand. And they were promised the right to develop a brand new franchise after the release of the next game. They were also to receive unspecified better royalties.

Modern Warfare 2 was finished. The game sold more than $1 billion at retail. But on Feb. 3, Activision initiated a legal investigation into wrongdoing by the co-founders. The founders were questioned in a windowless room for over six hours over President’s Day, and their employees were grilled as well. The founders were told that they would be insubordinate if they attempted to console their employees. The firings happened on March 1. Activision Blizzard then announced it would have a different studio working on Call of Duty games, and West and Zampella fired off their own lawsuit yesterday.

In the grand scheme of things, $36 million seems like a small price to pay for something like $3 billion in revenues. It will be interesting to hear Kotick’s side of the story.

[update: Here’s a comment from Activision: Activision is disappointed that Mr. Zampella and Mr. West have chosen to file a lawsuit, and believes their claims are meritless. Over eight years, Activision shareholders provided these executives with the capital they needed to start Infinity Ward, as well as the financial support, resources and creative independence that helped them flourish and achieve enormous professional success and personal wealth.

In return, Activision legitimately expected them to honor their obligations to Activision, just like any other executives who hold  positions of trust in the company.  While the company showed enormous patience, it firmly believes that its decision was justified based on their course of conduct and actions.  Activision remains committed to the Call of Duty franchise, which it owns, and will continue to produce exciting and innovative games for its millions of fans.]