When Silicon Valley investor Vinod Khosla predicted that “robots would replace 80 percent of doctors,” the medical community was outraged. Now imagine how lawyers might feel if he made the same claim about their profession.

The truth is, Khosla had a point. Thousands of miles away on the East Coast, the IBM Watson robot was rapidly churning through medical cases at the Memorial Sloan-Kettering Cancer Center, learning to make diagnoses and treatment recommendations for patients.

Now lawyers, too, are beginning to reap the benefits of data analysis software. And for the most part, they welcome the help. In recent years, elite white shoe firms have invested in software to expedite the process of analyzing large volumes of legal documents. Technology-assisted review, also known as predictive coding, uses machine-learning techniques to automate the prioritization of documents for review, based on how likely they are to be relevant to a case.

Computers aren’t replacing lawyers. However, new software for electronic discovery is helping the most prestigious firms unearth facts that may have eluded paralegals or junior lawyers. In its simplest terms, electronic discovery refers to the process of retrieving and exchanging digitized information for the purposes of civil litigation.

This software is also cutting costs, with about 75 percent of e-discovery budgets set aside for attorneys to review documents.

In a recent study of Fortune 1000 counsel by FTI Consulting, 57 percent of lawyers responded that predictive coding will improve e-discovery and reach the majority of firms by 2013. According to the study, entitled “Advice from counsel,” most respondents believe that predictive coding can automate the document review process and reduce costs. 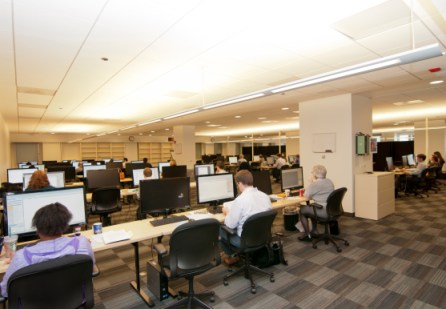 Above: Lawyers and developers working side-by-side at the lawfirm McDermott Will & Emery’s discovery center.

“Software won’t eliminate lawyers, but it frees up our time to focus on what matters, which is winning,” said Geof Vance, a partner at law firm McDermott Will & Emery, which is using kCura, a company that develops e-discovery applications and helps lawyers prepare for deposition hearings. KCura is best known for its flagship product, Relativity, which has more than 75,000 customers worldwide, a number that jumped by 40 percent in 2012.

KCura has been around for over a decade. The Chicago-based founders became fascinated with e-discovery after consulting with a large law firm. They set their sights on developing new technology to rapidly move millions of small files, automatically update records, and import and export data simultaneously.

“Our practice loves that they don’t have to spend months in a warehouse looking through documents,” said Vance. Corporate clients love it, too — paralegal and lawyer fees are an immense expense. A spokesperson for KCura would not disclose specific pricing information, beyond that firms typically pay for a three-year subscription. However,  large firms will typically set aside about $20,000 or more for predictive coding technology (costs vary by number of users and size of the firm), so expect costs to be in that realm.

Vance’s firm is sold on the benefits of technology, particularly in the wake of its landmark win.

Last year, dozens of law firms were vying to represent beer manufacturer Constellation Brands in one of the largest antitrust cases in history. The goal for Constellation was to gain control of the Corona beer brand. Vance’s firm was selected, partly because it promised to sort through millions of documents in a few short weeks and deliver the necessary data to the U.S. Department of Justice.

This case involved drawn out negotitions between some huge corporate brands, including Anheuser-Busch InBev (the folks who make Budweiser beer, among other things) and Constellation. In April, the firm helped negotiate and approve the $20 billion merger of Anheuser-Busch InBev and Grupo Modelo, makers of Corona beer. The settlement required Modelo to divest its entire U.S. business to Vance’s client, Constellation Brands, making it the third-largest beer supplier in the country.

“We were faced with over 10 million documents, maybe more,” Vance recalled. By phone, Vance told me that it would have been a “near impossible task” to have a team of junior lawyers poring over every page to determine its relevance.

According to Vance, this was the first time that the Department of Justice utilized predictive coding technology. “They saw that we were able to accomplish what would have been impossible,” he said.

Technologies like kCura employ machine learning and artificial intelligence technology to mimic human reasoning. The software is designed to get smarter over time.

It works like this: A junior lawyer can load thousands of documents into the kCura program and manually review a small batch, marking any page that may prove useful to a case. The manual review is repeated by lawyers until the program learns what to look for.

“As we teach machines to replicate logical thinking, we can see that many elements of human thinking are binary and replicable,” explained Bruno Aziza, a data-science expert who has worked at a number of business intelligence firms that count law firms as clients, most recently SiSense. “The legal process is full of repetitive and tedious tasks that cost money to clients and time to lawyers.”

KCura isn’t the only company that is providing computational tools to law firms, so a single lawyer can do the work that might have required hundreds. Silicon Valley-based Clearwell (owned by Symantec) also works with dozens of government agencies and law firms. IBM also offers e-discovery technology to law firms and health care, although some consider this technology to be a legacy product.

Many law firms have found these tools to be so effective that they’ve set up special e-discovery practices.

McDermott Will & Emery has a technical team, run by Vance, which claims to cut client discovery costs by more than 85 percent. Global law firm DLA Piper also runs a well-known electronic discovery practice and can search through half a million documents in just under a week, according to the New York Times.

With lawyers on its side, e-discovery and predictive coding technologies are selling well. However, there is always the risk that lawyers will cease using the technology if an error is made or they lose the case.

“Everybody would just blame the predictive coding rather than the sophistication of the lawyers,” Brandon Daniels, the president of managed services at Clutch Group, told the Wall Street Journal.

However, most lawyers agree that predictive coding technology is an important development. It brings them the tools that Amazon shoppers have enjoyed for years: Rather than wading through mountains of online documents, an algorithm can serve relevant suggestions based on previous searches. Computers won’t replace lawyers, but they will do the bulk of the heavy lifting.