I’ve just landed in Beijing and I managed to get to a Chinese tech conference called CHINICT in time to hear some interesting local social networking news. 51.com, one of the largest social networks in the country, is closing a $50 million round and plans to launch a platform for third party developers later this summer.

This is notable because 51.com has more than 25 million monthly active users, and more than 100 million total registered users, making it the second largest social network in the country behind Qzone. While I hear that other large Chinese social networks are also looking at launching platforms, 51.com appears to be the first one to discuss its plan publicly. Also, it is separately launching the alpha version of a casual gaming platform in August.

I asked 51.com senior vice president Yonghe Yao if his company was planning on supporting existing open standards provided by Facebook’s platform (which has already been licensed to competitor Bebo), or the rival Open Social standard championed by MySpace and Google. He tells me that his company is evaluating open standards from US companies and hope to incorporate as many standards as possible.

Leading application companies that are already on Facebook and other social networks have been eyeing the Chinese market, as Slide chief executive Max Levchin told me last month. Its not just that Chinese social networks are some of the largest in the world, it’s about revenue.

51.com, for example, made 44 million in revenue last year, 70 percent of which was from virtual goods and other user-related revenue streams; the other 30 percent came from ads. In fact, I hear that the largest Chinese social networks are hesitant to open up too much to third parties because they want to make sure they’re the ones who make money from virtual goods.

Slide — and many other application developers — are also looking at virtual good sales as new ways of making money.

51.com isn’t disclosing further details on its funding at the moment; it has raised previous funding from Sequoia Capital, Redpoint Ventures, Intel Capital, and others. Its rivals have also been busy on the funding front. Most recently, neck-and-neck rival Xiaonei raised a whopping $430 million round.

More info on 51.com. It recently launched an instant message service that 1.5 million users log on to every day. It has grown large in smaller Chinese cities, and 80 percent of its users are between the age of 14 and 25. Users spend an average of 41 minutes on the site and log in 18 times per month.

You might have also noted that many Chinese companies have numbers for names — video site 56.com is another one. The reason is that these names are homonyms in Chinese. 51.com sounds like “I want.” 56.com sounds like “I’m happy.” 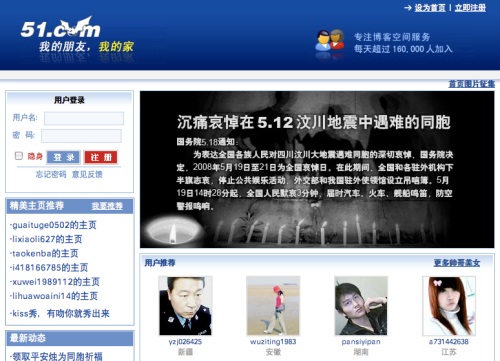