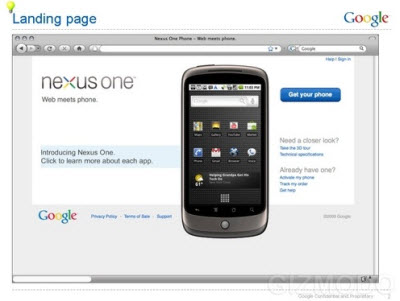 Google’s Nexus One phone, which could ship as early as next week, will evidently have a couple of interesting features, according to documents newly leaked to the Gizmodo blog.

Google plans to sell the Google-designed, Android-based phone by itself. The unlocked and unsubsidized phone will sell for $530. Meanwhile, T-Mobile plans to sell a subsidized version for $180 with a two-year service contract. The phone service, with 500 minutes of airtime per month, text messaging, and data is $79.99.

Details are being closely watched since the Nexus One uses Google’s Android operating system and is the first such phone designed by Google itself. The strategy reflects Google’s desire to take the entire design of the phone into its own hands in order to ensure a quality experience and to make sure the phone is unlockable, a key feature that users want in the name of greater consumer choice.

Those who use Family plans, Flexpay, SmartAccess and KidConnect subscriptions must buy the phone unlocked in order to use those plans. You can have up to five Nexus One phones per Google account. Google plans to sell the phone at Google.com/phone.

If you cancel the plan before 120 days, you have to pay the subsidy difference, or $350. For some reason, Google makes sure in its terms of service agreements that buyers know the maker of the phone is HTC, not Google itself. TechCrunch also noted in a post that Google may be planning an automated backup service for the Nexus One phones.

Earlier today, we noted that T-Mobile and Google are expected to announce the Nexus One on Jan. 5. [screenshot credit: Gizmodo]