That new MacBook Pro reportedly slated for Q4? It may have not one, not two, but four USB Type-C ports.

At least, leaked photos published today by Cult of Mac indicate as much. Four USB-C ports and one headphone jack are the only things you can see on the sides of the chassis.

One of the things missing from the chassis is the row of F1-F12 keys. In its place is a flat section — which could presumably be taken up by the “OLED display touch bar” that analyst Ming-Chi Kuo is expecting on the refreshed MacBook Pro. 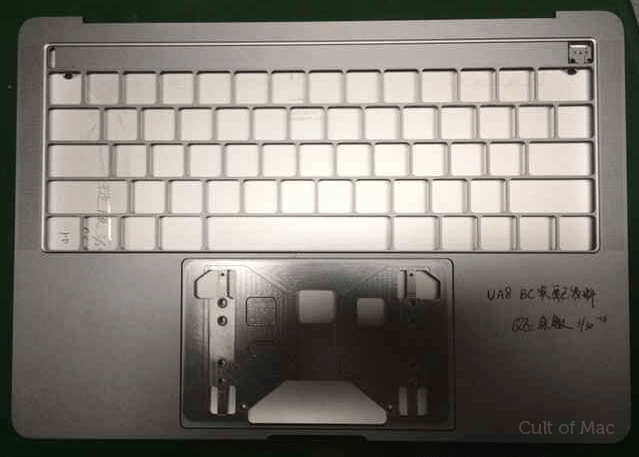 Above: Leaked photo reportedly shows the top of the next MacBook Pro keyboard chassis

The speaker grilles on either side of the keyboard have also been redesigned.

But the switch from USB-A to USB-C (times four!) is remarkable, though it could be jarring for those who haven’t begun the journey with the MacBook or mobile devices that use the USB-C spec. It solves the problem of not being able to simultaneously charge the laptop and charge a phone using the laptop, but it also means that people will need more dongles in order to use peripherals, such as external monitors and SD card readers.

Then again, it should be welcomed by those who believe in industry standards. If the leaked photos are legitimate, it means Apple will be dispensing with its proprietary MagSafe charging mechanism. Also, unlike USB-A, USB-C is reversible, so you don’t have to flip it if you find out the hard way that you stuck it in wrong.

See Cult of Mac’s article for more leaked photos of what could be the next MacBook Pro.