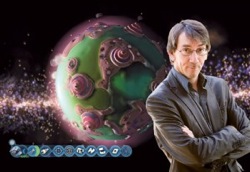 Will Wright, the legendary game designer behind the wildly popular franchises SimCity and The Sims, as well as the slightly less-successful Spore, is leaving video game giant Electronic Arts to lead his own “entertainment think tank,” The Stupid Fun Club. At the same time, EA is investing in Stupid Fun Club (Wright and EA now own equal percentages of the group) and will work with Wright in turning the Fun Club’s ideas into video games.

EA Vice President Lucy Bradshaw, who heads the Maxis division where Wright worked, told Gamasutra that this move is just an “evolution” of Wright’s relationship with EA. That description fits in with EA’s investment and also seems consistent with Wright’s history — he usually designs a groundbreaking game like SimCity or The Sims, stays involved with a few sequels or spin-offs, then eventually moves on to the next thing, while Maxis continues to exploit the franchise with additional games.

So what is the Stupid Fun Club? Well, the group’s web site is rather cryptic, but here’s a profile Newsweek published back in 2002. At the time, it was described as an effort Wright founded and funded to break into Hollywood, with a focus on robots. The announcement doesn’t say whether the group will still be all about the robots, or whether it will broaden its scope now that Wright is working there full-time. It does sound like the vision has expanded beyond Hollywood to include video games (hence EA’s involvement), as well as television shows, toys, and more. For the non-game projects, the Fun Club will probably work with other media companies.

Wright spoke at the Web 2.0 Expo last week, where he talked about how the game design process should evolve.