Lego is introducing five different robots in one play set at CES 2017, the big tech trade show in Las Vegas this week. I got an early look at one robot, Vernie, at a demo by Simon Kent, lead designer of Lego Boost, who will also show it at the Kids@Play Kids & Technology Marketplace at CES.

“Lego Boost empowers kids to bring their own models to life and program them,” Kent said in an interview with VentureBeat. “They can learn about coding while having fun.” 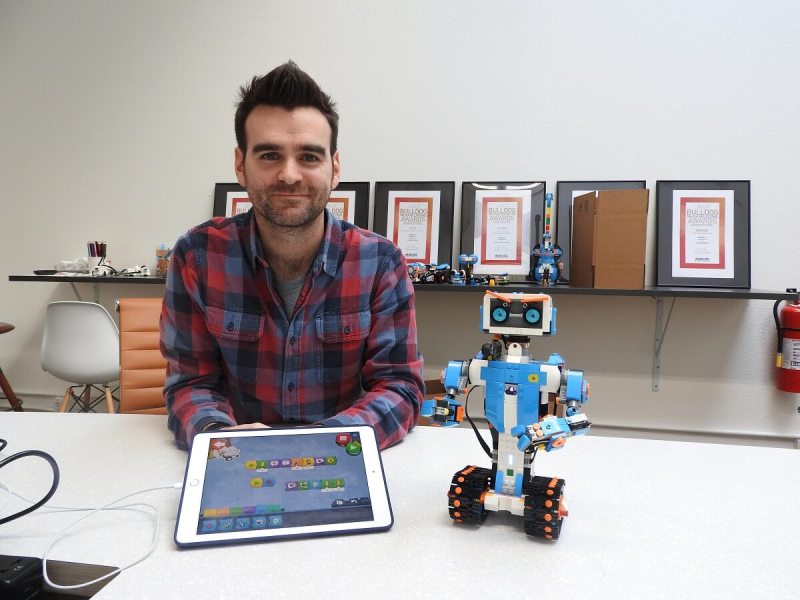 Above: Simon Kent is lead designer of Lego Boost, including the robot Vernie.

Kent said that Mindstorms is geared at older students who are actively learning programming. But Boost was inspired by the Maker movement, where freeform play and creativity go with learning.

“You can tinker with Vernie’s physicality,” Kent said. “You can tinker in the coding too. The Maker feel is the tone of voice to inspire kids to be creative.”

Lego Boost combines the endless play of a traditional Lego toy set with the movement and sound robot capabilities made possible through an easy-to-use, app-based coding environment. Kent said that Lego designed Boost for children ages 7 and older. You can turn Vernie into just about anything, including a rapper, comedian, or dancer. The sounds come out of the iPad or other tablet that you are using.

The Boost platform has instructions to build five very different robots. At the center is a Move Hub, a stud-covered brick with a built-in tilt sensor. Children can add Lego elements, such as a motor and a sensor that does color and distance detection. It takes maybe five minutes to build a vehicle. Then you play with various digital blocks on the app to make it move around and talk.

The five models include Vernie the Robot, Frankie the Cat, the Guitar 4000, the Multi-Tool Rover 4 (M.T.R.4), and the Autobuilder. Each is designed to give children the basic building and coding skills needed to express their creativity.

The app has guidance, building instructions, and simple coding commands to bring to life each of the robots. Children can build behaviors and actions by linking digital coding blocks in an easy-to-understand horizontal layout. Kids can program without needing to know spelling or typing.

Children can add voice recordings, programming the robots to perform a set of actions and then speak in the child’s own voice. The app has more than 60 activities designed to inspire additional building, coding, and play.

The app has a creative canvas that includes basic building instructions for three simple base models that children can customize into their own creations. The bases include a walking base for making animals like a dragon or a pony, a driving base for building vehicles like a dune buggy or rover, and an entrance base so that children can make a castle, fort, or space station. 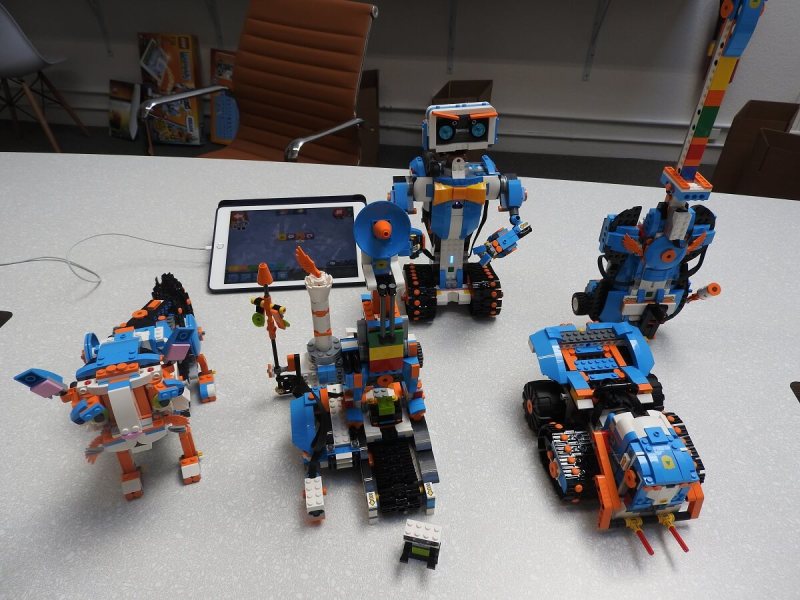 Once a child is comfortable with building and coding the various Lego Boost models, they can use the kit to “boost” any creation.

As they build Vernie, the child receives voice prompts that encourage the next step in the construction. Once you plug Vernie’s head and chest into the hub, then you can turn him on. He starts talking to you and suggests going for a drive.

“But if you haven’t built the tracks yet, he will say something is missing,” Kent said. “You develop a personal and emotive relationship with Vernie. That is the key message.”

When you first meet Vernie, he asks your name. He waits for the response, and then he says, “That’s a nice name.” You can record your own voice and put filters on it, making it sound like Vernie’s voice or someone else’s.

Kent equipped Vernie with a toy gun. You can cast him as a cowboy or police robot. You can instruct him to move around and then fire a small dart. You can also program the robot to fart infinitely, if you wish.

“It makes it more social as an activity,” Kent said.

The $160 robot set will be available in the second half of 2017. Lego Boost runs on six AAA batteries. The app is free on iOS and Android. The set comes with 843 Lego elements and a playmat that makes it easier to do coding challenges. The robot is aimed at kids ages seven to 12.